November 19, 2021
The MLS playoffs kick off tomorrow, and we’re here to give you the low-down on the 14-team, four-round, single-elimination postseason tournament. Vamos.
Sports NewsSoccer 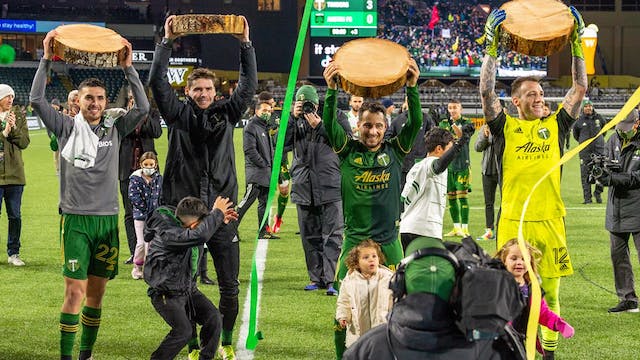 Because MLS loves to keep us on our toes, everything came down to November 7th’s “Decision Day”. Eleven teams competed for six final playoff spots (three in the Eastern Conference and three in the Western Conference), and when the dust settled, seven teams from each conference clinched a spot.

The action kicks off with two first-round games tomorrow — the Philadelphia Union vs. NY Red Bulls at 2:30 p.m. ET, and Sporting Kansas City vs. Vancouver Whitecaps FC at 5 p.m. ET.

No. 1 New England Revolution: The Revs are in it to win it, having won this year’s Supporters’ Shield (awarded to the team with the best regular-season record) in spectacular fashion. Their head coach, Bruce Arena, is tied for the winningest coach in MLS history. Bonkers.

No. 2 Philadelphia Union: The Union won the Supporters’ Shield back in 2020 but were then unceremoniously ousted in the first round of the playoffs by the Revs. They’ve only had one postseason victory as a franchise, so they’ll be leaning heavily on their ever-dependable goalkeeper, Andre Blake, to expand their W column.

No. 3 Nashville SC: Nashville is strutting into the playoffs behind one of the league’s most trustworthy defenses. They also have a star in MVP candidate and midfielder Hany Mukhtar, but the playoffs will test whether Mukhtar can shine in the postseason.

No. 4 New York City FC: NYCFC are one of the statistically superior teams in the league. Perhaps most convincingly, they boast 2021 Golden Boot winner (i.e. the league’s leading goal scorer), Taty Castellanos, who’ll look to fire his team to the top.

No. 5 Atlanta United FC: There was a time we were unsure Atlanta would even make it to the playoffs, but here they are. After a few mid-season coaching switches — from Gabriel Heinze to Rob Valentino to Gonzalo Pineda — the Five Stripes will try to make a deep run this postseason.

No. 6 Orlando City SC: Orlando pushed hard in the waning games of the regular season to earn a playoff bid. Yes, they’ve been quite good at times, but their star forward, Nani, hasn’t been playing up to his usual standards lately. Only time will tell.

No. 7 NY Red Bulls: The Red Bulls barely squeaked into the playoffs after being virtually written off just months ago. They went 7-1-4 (wins, losses, draws) in the final games of the season and, in their 12th consecutive playoff appearance, they’ll be looking to prove why they deserve to be there.

No. 1 Colorado Rapids: As mentioned, the Rapids executed a club-record 61 points in the regular season to rise to the top of the Western Conference for the first time in franchise history. They boast depth in all their positions, and we expect their offensive core — forwards Michael Barrios, Diego Rubio, Dom Badji or midfielder Jonathan Lewis — to score some golazos in the playoffs. Choose your fighter.

No. 2 Seattle Sounders FC: The Sounders are a perennial powerhouse, but they were winless in their last six regular-season games. It’s not a great look to be on the decline as the playoffs are starting, but we’ll be the last to count the Sounders out.

No. 3 Sporting KC: Sporting KC (SKC) were in the hunt for the West’s top spot until the very end, and for good reason. While they did lose their final regular-season game to Real (reh-AHL) Salt Lake 1–0, SKC are consistently excellent with strikers MVP finalist Dániel Sallóiand Johnny Russell leading the way.

No. 4 Portland Timbers: The Timbers are all-in behind midfielder Sebastián Blanco. And while Blanco has only recently returned from injury, the Argentine maestro will look to propel Portland to the top. Let’s just hope their defense pulls through as well.

No. 6 Vancouver Whitecaps FC: Sparked by a transition to interim head coach Vanni Sartini in August, Vancouver — the only Canadian-based team in the playoffs — was red-hot in the tail-end of the regular season, unbeaten in their last six games. Who’s to say the ’Caps can’t pull off more upsets?

No. 7 Real Salt Lake: RSL produced perhaps one of the most dramatic moments of Decision Day, thanks to a 95th-minute extra-time goal from midfielder Damir Kreilach to send them to the playoffs. (And with a bicycle kick assist, no less.) But highlight reels aside, Utah isn’t expected to make it very far. Sorry, not sorry.

The teams at the top are there for a reason. Namely, the New England Revolution are coasting behind a high-powered offense led by the likes of forward Adam Buksa.

All this to say, expect drama this postseason. Our picks — the Revs and the Rapids — might not be the most original, but expert predictions run the gamut. Some have Nashville in the final, others Portland, Seattle, and even Atlanta.