The MLB has a problem

GOOD MORNING! Welcome to The GIST’s Sunday Scroll, where we dive deep into one timely sports topic. We’re taking you out to the ballgame this Father’s Day Sunday...but it’s not all peanuts and Cracker Jacks. Ahead of tomorrow’s crackdown on the use of foreign substances in baseball, we’ll break down the sticky situation. 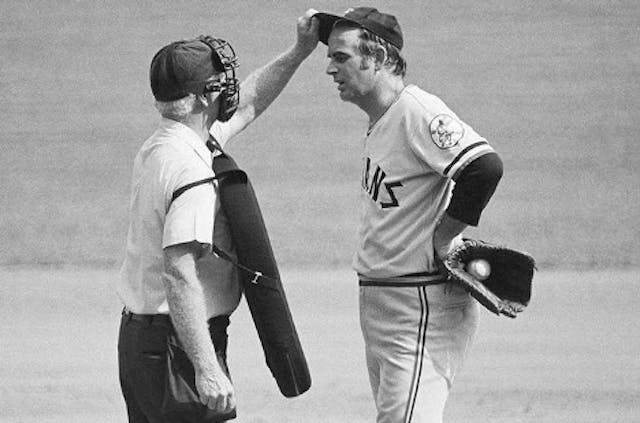 I reckon I tried everything on the old apple, but salt and pepper and chocolate sauce topping.

— Hall of Fame pitcher Gaylord Perry, who was notorious for doctoring baseballs and throwing a spitball. Appetizing.

Before we dive into baseball’s latest scandal, which involves pitchers using sticky substances to improve their game, here’s a little background on some of the sport’s biggest controversies over the years:

Black Sox scandal: The 1919 Black Sox scandal was one of the first controversies to rock the baseball world. Eight members of the Chicago White Sox conspired to throw (no pun intended) the 1919 World Series in exchange for money from a gambling syndicate.

Steroids: Today’s scandal has drawn comparisons to the steroid era of the ’90s and early 2000s, and for good reason. Now-retired baseball star Jose Canseco, who admits to having used performance-enhancing drugs (PED) himself, estimated that as many as 80% of playersused steroids.

Sign-stealing: The act of observing and relaying the opposing team’s non-verbal gestures (aka signs) is frowned upon by baseball purists, though some instances of sign-stealing, such as when a player on base relays pitch locations to the batter, are technically legal.

The 2021 pitching scandal revolves around pitchers using “foreign substances” to improve their grip on the ball. The enhanced grip enables pitchers to increase the spin and movement on their throw, making the ball harder to hit. Trouble is, those foreign substances are banned from baseball, and have been for over 100 years.

Fast-forward to today, and spit has been swapped for everything from sunscreen and Vaseline to more advanced products like the super sticky Spider Tack, a chemical product developed to help weightlifters improve their grip on lifting stones.

As we mentioned, the foreign substances rule has been around since 1920, but has rarely been enforced. Previously, umpires would wait for a manager to ask that an opposing pitcher be checked. But managers wouldn’t flag their opponents since their pitchers would also be checked and likely caught cheating too.

The use of foreign substances notably garnered attention in 2017 when a ball mysteriously stuck to St. Louis Cardinal Yadier Molina’s chest protector. It came up again in 2018 when then-Cincinnati Reds pitcher Trevor Bauer called out the Astros (we’ve since learned Bauer may need to take a look in the mirror). However, nothing changed...until now.

The MLB has been investigating the use of foreign substances since the season began in April. Following talks of a crackdown at a June 3rd owners’ meeting, Yankees pitcher and three-time All Star Gerrit Cole stammered through an answer when asked if he had ever used Spider Tack. Aca-awkward.

Enforcement of the MLB’s longtime foreign substance rule begins in earnest tomorrow. Umpires will inspect players as they come off the field ahead of TV commercial breaks. Starting pitchers will be checked multiple times per game while relievers will be inspected at least once.

As for punishment, pitchers caught using foreign substances will be ejected from the game and suspended for 10 days…with pay. *eye roll* Position players will only be ejected if they’re caught using a substance to help a pitcher, and the pitcher will also be held responsible. And there’ll be increasingly harsher punishments for repeat offenders.

Cracking down on foreign substances is a small stepin tackling the many problems in the MLB, but, as seen recently with Tampa Bay Rays pitcher Tyler Glasnow, the midseason implementation of this change will likely lead to other unforeseen issues, like pitcher injury.