September 12, 2021
Football is back, baby. And today, in honor of the 32 teams across the U.S., we’re breaking down some of the best (and weirdest) traditions.
Sports NewsFootball 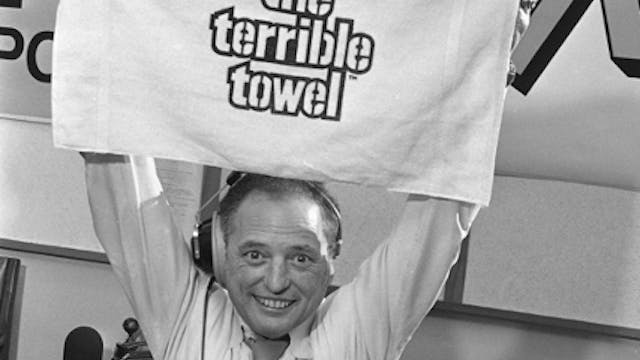 — The late Myron Cope, discussing his idea for the now iconic “Terrible Towel,” a staple among Pittsburgh Steelers fans. Boy, did the radio host’s idea strike.

As a coach in the NFL, you haven’t truly won a big game until you’ve been soaked in a bath of flavored electrolytes. Gatorade showers aren’t unique to one particular team, and they aren’t unique to football anymore either, but they remain a popular NFL tradition. The bigger the game, the bigger the bath.

While there are differing opinions about when the tradition began, the New York Giants popularized the trend in the '80s. It began in 1984, when defensive tackle Jim Burt received criticism from head coach Bill Parcells before one of their biggest games against the Washington Football Team.

The tradition has been so cemented into football culture that gamers can even dunk their coach in some Madden video games. And we can’t forget one of the most popular Super Bowl prop bets: the color of the Gatorade poured over the winning coach. Hint: orange is a good guess.

Possibly the best-known tradition in the NFL, the Pittsburgh Steelers’ Terrible Towel, or the “luckiest towel in sports,” first appeared in 1975 thanks to the aforementioned Cope.

The Black and Gold had a great season that year, making it all the way to Super Bowl X, where the team provided fans with specially printed towels that read: “Myron Cope’s Official Terrible Towel.” Sure enough, the fans waved and the Steelers performed, securing a 21–17 victory over the Dallas Cowboys, all “thanks to the Towel.”

The towel’s magic continues today. In 2010, Pittsburgh began inviting a celebrity to do a “Terrible Towel Twirl” before kickoff at each home game, and many recognizable names have had the honor, including Channing Tatum and Wiz Khalifa. Black and yellow, black and yellow.

At Lambeau Field — home of the Green Bay Packers — there’s only one appropriate touchdown celebration: the Lambeau Leap. It all began in 1993 when LeRoy Butler launched himself into the stands after he scored his first career NFL touchdown.

Today, seats in the “Jump Zone” are the most coveted in the stadium. But players who jump often have less than ideal experienceswith fans. Some have been covered in beer, ketchup, popcorn and in true Wisconsin fashion, even cheese curds.

The NFL cracked down on excessive touchdown celebrations in the early 2000s and has consistently made changes to the rules since. But, lucky for Packers fans, the Lambeau Leap was grandfathered into the rules, allowing for the tradition to continue.

The Seattle Seahawks’ first stadium in the late '70s was the Kingdome, a concrete-covered facility that echoed with the cheers of fans for the home team. In preparation, visiting teams trained with special noise systems in an attempt to mimic the loud rumble experienced during games.

In a tribute to the fans and their vocal support, in 1984 Seahawks president Mike McCormack retired the No. 12 jersey. The number symbolized the “extra player” (the fans in the stands) that contributed to every Seahawks win.

In 2011, the 12s turned the volume even higher during a battle with the then-reigning Super Bowl champion New Orleans Saints. During a game-winning 67-yard touchdown run by Marshawn Lynch, eruptions from the stands registered as a 1-to-2 range magnitude earthquake. Can’t make this sh!t up.

Before every home game, the Seahawks invite one person — a celebrity, beloved community member or former player — to hoist a number 12 flag. So special.

Dating all the way back to the league’s inception in 1920, the oldest tradition in the NFL is the annual Thanksgiving Day game. Since 1934, the Detroit Lions have always played on the holiday in November, only missing the tradition due to World War II between 1939 and 1944.

Not long after, in 1966, the Dallas Cowboys joined the Thanksgiving Day club when general manager Tex Schramm took a page out of Richards’ book and sought out a way to get more national attention and more fans in the stands for “America’s Team.”

One of the newer traditions in the NFL, Bills Mafia has already made its mark. As some of the most committed fans in football, Bills supporters have endured a lot. After four consecutive Super Bowl appearances in the 1990’s, the squad hasn’t seen similar success for a while, but their support system has only gotten stronger.

In November 2010, Bills fans came to the defense of wide receiver Stevie Johnson after he dropped an important pass during a game against the Steelers. Stevie tweeted about the drop and received criticism from ESPN’s Adam Schefter.