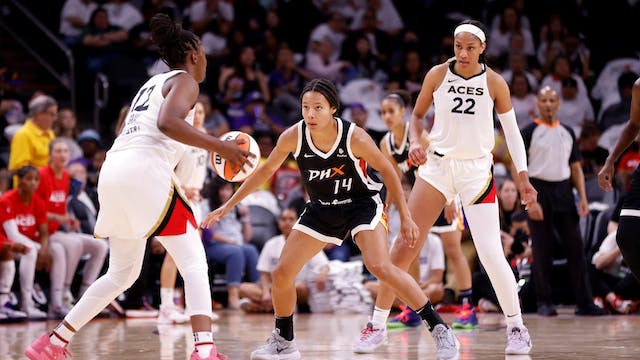 Unlike most other pro sports where postseason berths are decided by divisional or conference standings, eight of the W’s 12 teams (regardless of conference) qualified for the three-round playoffs.

And yes, that best-of-three first round is new this year. For the past six seasons, the first two rounds were single-elimination, giving fans plenty of stress and not enough basketball. So the league (thankfully) made a change, transitioning from four rounds to three and ensuring each team will have at least two games to prove their postseason mettle.

The matchup: To say the Commissioner's Cup–winning Aces have dominated the Mercury this season would be an understatement. Las Vegas swept their season matchups 3-0, winning each clash by 16.7 points on average. Sheesh.

Players to watch: For Las Vegas, it’s the dynamic duo of the aforementioned A’ja Wilson and Kelsey Plum, who made history this year as the first teammates to each score over 700 points in a season.

The matchup: With the exception of a blowout Sky win back in May, things have been close when these squads face off — Chicago owns the 3-1 edge, but their last three games were decided by eight points or less. Book your manicure for after this series.

Players to watch: The Sky are, in a word, stacked, retaining most of their 2021 title-winning squad, including All-Stars Candace Parker, Courtney Vandersloot and last year’s finals MVP, Kahleah Copper.

Keys to success: While the perimeter battle between Vandersloot and Ionescu will be one for the ages, this series could come down to which squad can prevail in the paint. The Sky boast a tough one-two punch in Parker and Emma Meesseman, so the Liberty will need their bigs, Natasha Howard and former ChiTown star Stef Dolson, to slow them down. Game on.

The matchup: The Sun may be the higher-ranked squad, but the Wings actually won the regular season head-to-head, taking two out of their three contests. Adding to the intrigue, both squads have been red-hot leading up the playoffs — Connecticut went 8-2 over their last 10 games, while Dallas posted a 7-3 record in that span. Caliente.

Players to watch: The Sun’s quest to capture their elusive first ’ship will depend largely on reigning league MVP Jonquel Jones, who leads the team with an average of 14.6 points and 8.6 rebounds a game. But Connecticut’s starpower doesn’t stop there — last year’s Most Improved Player, Brionna Jones, just keeps getting better and provides a huge spark off the bench.

Keys to success: The Wings are still a young squad with limited playoff experience, something Connecticut will look to capitalize on, especially as they lead the league in steals and points off turnovers per game. But if Dallas can keep it clean, this series could go the distance.

The matchup: The W saved the best for last with this 2018 Finals rematch, a clash between two squads who’ve combined to win three of the last four titles. The Storm and Mystics posted identical 22-14 records this season, but Seattle eked out home-court advantage by winning two of their three meetings.

Keys to success: With Bird running the offense, the Storm play at a quick pace, scoring 12 points per game off the fast break (second-highest in the league). But that style of play meets an elite Washington defense that likes to slow things down. If the Mystics can control the tempo, they might just find some magic.

As mentioned, the action begins with the Sky vs. the Liberty tonight at 8 p.m. ET on ESPN2 in the U.S. and on Sportsnet 360 in Canada, followed by the 10 p.m. ET clash between the Aces and Mercury on ESPN.