Everything you need to know about the Solheim Cup 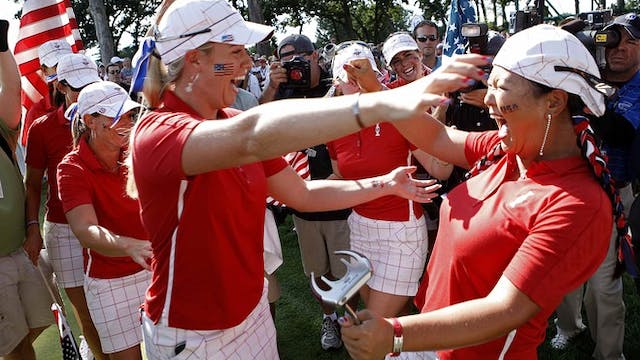 The Solheim Cup starts today, so let’s take a break from packing away our whites and saying so long to summer to get the scoop on the biggest team event in women’s golf. Stay with us here, because this isn’t your average golf tournament.

It's not unlike going to war, minus the bloodshed and violence.

— Golfer and two-time Solheim Cup–winner Christina Kim, on what singles day at Solheim is like. Um, yikes?

From an LPGA perspective, this tournament means nothing. No points are awarded, no money won, no leaderboards climbed. But that’s also what makes it amazing.

The Solheim Cup began in 1990 as the women’s answer to the storied Ryder Cup of men’s golf. Unlike most other pro golf events, where golfers play for themselves, the Solheim Cup pits two teams of 12 golfers against each other: Team USA vs. Team Europe.

The event runs every two years, always on the Labor Day weekend, in the opposite years of the Ryder Cup (which always takes place at the end of September), but two major global events have caused changes to their schedules. The 2001 Ryder Cup was postponed by a year due to the events of 9/11, so after 2002, the Solheim was pushed to odd years.

The three-day match-play schedule is a bit unusual by golf standards. Day 1 and Day 2 (aka today and tomorrow) start with four foursome matches in the morning and four fourball rounds in the afternoon. Monday’s Day 3 features 12 singles matches. Here’s how these work:

Foursome: Two pairs of golfers — one pair from each team — will face each other in a foursome to start off each day. Also known as “alternate shot,” each pair uses just one ball, and golfers alternate between shots. The pair that takes the fewest shots to finish the hole wins that hole.

Fourball: Also called better ball or best ball, two pairs of golfers — one pair from each team — compete directly against each other. All four golfers play their own balls throughout the round (rather than alternating shots) and each hole is won by the team whose member has the lowest score.

Singles: This one is a straight head-to-head competition. Each American competes against a European. Win a hole, go up one. Lose a hole, go down.

How to win: Each foursome, fourball and singles match is worth one point. A total of 28 points are up for grabs, and points accumulate over the three days. In the event a match ends in a tie, points are halved (i.e., Europe’s winning score in 2019 was 14.5 to USA’s 13.5).

The host team: Led by the Korda sisters — World No. 1 Nelly and No. 18 Jessica — Team USA is looking to return to glory on home soil after losing to Europe in Scotland in 2019. Fortunately, they have a stacked team to help them do it.

Player to watch: As one of three rookies on this team, captain’s pick Yealimi Noh is on a hot streak, finishing third in July’s Evian Championship major before tying for 13th in last month’s AIG Women’s Open (also a major).

The reigning champs: Team Europe has a perfect mix of experience and youth. Recent AIG Women’s Open winner Anna Nordqvist is making her seventh Solheim appearance, and Charley Hull of England and Spain’s Carlota Ciganda are each representing the blue and yellow for their fifth time.

Player to watch: France’s Céline Boutier has the best record in the tournament. She participated in four (of a possible five) events in her 2019 Solheim Cup debut and won every one, giving her the only perfect win percentage in this year’s event.