HAPPY SUNDAY! There’s only one more college football game until August, and it’s tomorrow night’s National Championship. Prep your jalapeño poppers and place your bets…this one’s for all the marbles. 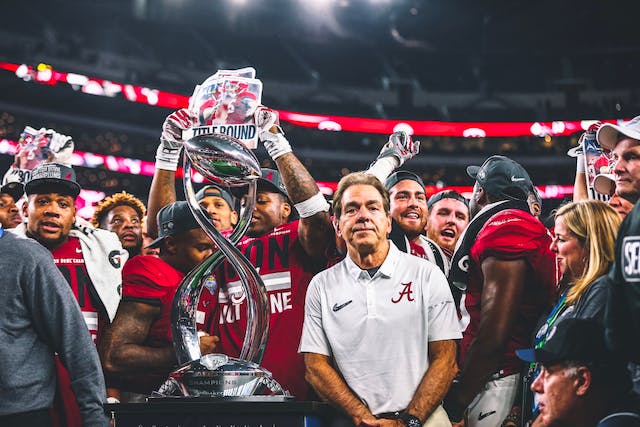 — Alabama defensive coordinator (DC) Pete Golding when asked if it was true that head coach Nick Saban gave out fewer “ass chewings” this season. Sounds like an HR violation to us…

🏆 It all comes down to this

Despite the ups and downs (and the many variants) faced this season, tomorrow night’s College Football Playoff (CFP) National Championship will feature the two teams everyone mostly expected: No. 1 Alabama vs. No. 3 Georgia.

Just over a month ago, Alabama beat Georgia 41–24 in the SEC championship, completely flipping the narrative about these two teams: undefeated Georgia had been the top-ranked team since Alabama’s upset loss to Texas A&M on October 9th.

Defending champ Alabama is making its sixth National Championship appearance in the last seven seasons, and a win would earn them their fourth title in that time. Absolute dominance.

As for Georgia, this will be their first National Championship appearance since the 2017–18 season when they lost to — wait for it — Alabama. A victory would give the Bulldogs their first championship since 1980.

Forgive us for sounding like a broken record, but Alabama QB Bryce Young really is all that. He’s exceptional at making great plays in tough situations and somehow always seems to find his receivers. Expect another standout performance.

Georgia QB Stetson Bennett is another story, though. Originally a walk-on, Bennett had to fight for his opportunities and was only given the starting spot after former starter JT Daniels was injured earlier this season.

For Georgia, tight end Brock Bowers continues to impress. The SEC Freshman of the Year has scored in the Bulldogs’ last three games and has posted a single-season program record 12 TDs so far. We wouldn’t be surprised if that record is extended tomorrow night.

Georgia head coach Kirby Smart is well aware of Saban’s success. As Alabama’s former DC, Smart has joined a host of other former assistants who have tried (and failed) to best their old boss.

Call us crazy, but we’re going against the gamblers and putting all our chips on the Crimson Tide. Let’s roll.

The battle begins tomorrow at 8 p.m. ET at Lucas Oil Stadium in Indianapolis, Indiana. It’ll air live on ESPN (as well as on the ESPN app) in the U.S. and on TSN in Canada.