December 19, 2021
Only six more sleeps until Christmas! Time for last-minute shopping, cookie baking and (soon enough) NBA games on Christmas Day. A tradition older than the Super Bowl, the NBA is gearing up for the 74th annual holiday showdown, so today we’re covering the history and previewing this year’s matchups.
Sports NewsBasketball 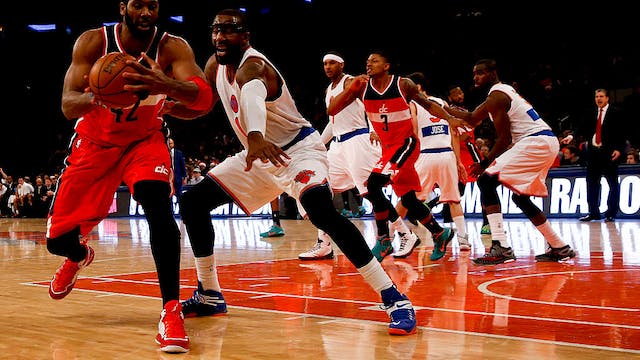 For us to be able to play on that day and allow the fans to get a glimpse of us, showcase our skills, and also allow them to enjoy a beautiful game of basketball.

— Player development assistant for the Brooklyn Nets and former NBA player Amar'e Stoudemire, on why he loved playing on Christmas Day. And what a beautiful game it is.

The NFL has Thanksgiving, the NHL has New Year’s Day, and the NBA has Christmas. The league’s best teams have met on December 25th each year since 1947, just one year after the Basketball Association of America (which later became the NBA) was formed.

There’s only one season in the tradition’s 74-year history when games weren’t held on December 25th, and that was in 1998. The league was in a lockout over a collective bargaining agreement (CBA) dispute, so the NBA (and the fans) missed out. (Touchy subject, MLB?)

💫 The best and brightest

Now that you have the backstory, let’s get into the most memorable Christmas Day games.

1984: You know Kevin Durant, and Steph Curry, and LeBron James, and Trae Young…but do you recall the most famous Christmas Day player of all?

1995: Like adding cayenne to your hot chocolate, the NBA decided to spice things up when they scheduled a Christmas rematch featuring the teams from the previous season’s finals.

2008: The LA Lakers made the Boston Celtics look like cotton-headed ninny muggins when LA snapped Boston’s 19-game win streak in a rematch of the teams’ finals series the previous year. Kobe Bryant led the Lakers with 27 points. A legend.

2017: In another classic Xmas showdown, the Golden State Warriors battled the Cleveland Cavaliers for the third straight year. Tied late in the fourth quarter, Klay Thompson drained one of his signature three-pointers to give the superteam the win.

2021: Both teams from last season’s finals —the Milwaukee Bucks and the Phoenix Suns —are slated to play on Saturday, but the games we’re most excited about are the Lakers vs. the Nets at 8 p.m. ET followed by the Dallas Mavericks vs. the Utah Jazz at 10:30 p.m. ET. Hoopy holidays, indeed.

Just like your holiday celebrations, the NBA has plenty of traditions. One we wish they’d bring back is the special edition Christmas jerseys. From 2012 to 2016, adidas released holiday jerseys just for the Christmas Day games. All about the drip.

Another tradition? The iconic Christmas commercials. Featuring basketball stars from past and present, the ads are almost as entertaining as the games. Our favorite, you ask?

👻 The ghost of Christmas present

Every good Christmas story features a Scrooge trying to ruin the fun.NBA Christmas, meet the Omicron COVID-19 variant that’s bent on surprising everyone for the holidays as it sweeps across the league (and if you’re tired of hearing COVID-19-related updates, trust us, we are too).

And while some fans say the league should’ve taken a break in anticipation of the holiday surge, others are calling for the NBA to swap out teams hit hard by COVID-19 for the Christmas Day games. For now, the league is implementing more frequent testing along with a mask mandate over the holidays.