June 06, 2021
HAPPY PRIDE! To celebrate Pride Month, we’re taking a closer look at the relationship between the sports world and the LGBTQ2S+ community, at barrier-breakers who helped end stigma and inspire change and at the progress still needed for sports to be a safe space for everyone.
Sports NewsGeneral 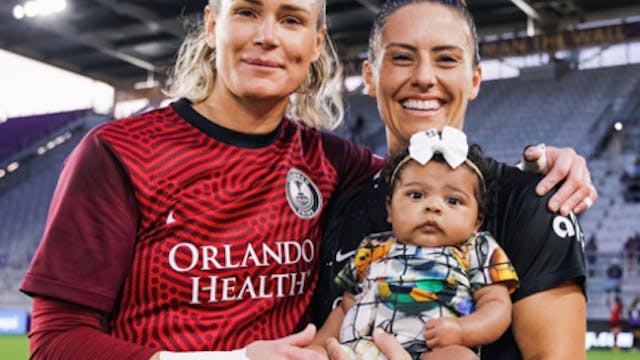 I didn’t see people of my community, and it made me feel like I had to hide, and it made me feel that I couldn’t live my truth. I think, for us, that is something that Ali and I strive to do just to create the visibility aspect in our sport and in our life and show that we get happy endings, too.

— Orlando Pride and USWNT star Ashlyn Harris, touching on the importance of representation in sports. Harris and her wife (and teammate) Ali Krieger welcomed their daughter Sloane into their lives in February. Family goals.

Pride Month is celebrated in June because of the June 1969 “Stonewall Uprising,” a pivotal moment in the gay rights movement, when a police raid occurred at the Stonewall Inn — a gay club in New York City — sparking a wave of riots.

Unfortunately, the sports world doesn’t have a great reputation when it comes to standing with the LGBTQ2S+ community. Homophobia was and is rampant in locker roomsand online sports communities, and athletes who discuss their sexuality have been subjected to discrimination and even physical harm for decades.

You know we stan Billie Jean King (BJK). Sadly, the tennis icon wasn’t able to come out on her own terms after being publicly outed in a 1981 lawsuit from a former partner. When the news spread, King lost all her professional endorsements at that time.

The WNBA leads the way in advocating for LGBTQ2S+ athletes today, but was slow on the uptake. In 2002, New York Liberty’s Sue Wicks became the first WNBA player to publicly come out as gay, but the league still distanced itself from the gay community for another decade. Ugh.

Before passing in 1995 due to AIDS-related complications, Burke set an example of courage for gay baseball players to come, like Billy Bean (not to be confused with Moneyball’s Billy Beane), who came out publicly in 1999.

Representation came much later in the other major pro leagues. In 2013, Robbie Rogers publicly came out while playing with the MLS’ LA Galaxy, making him the first openly gay athlete to play in any major men’s league.

Also in 2014, defensive end Michael Sam publicly announced he was gay ahead of the 2014 NFL Draft and became the first publicly gay player to be drafted into the league, when he was picked in the seventh round by the St. Louis Rams.

On the sidelines, a few coaches and managers have discussed their sexuality publicly, creating visibility and representation in decision-making roles within the sports world.

At the college level, then-Bryant University assistant basketball coach Chris Burns became the first Division I men’s coach to come out publicly in 2015. Burns even received praise(as he should!) after coming out from soon-to-be retired Duke head coach, Mike Krzyzewski.

🏅 On the world stage

Publicly coming out on the world stage is no small task. There have been many LGBTQ2S+ athletes at the Olympic Games; however, not all felt comfortable being out when they competed.

Fast forward to 2018, and figure skater Adam Rippon and skier Gus Kenworthy became the first openly gay men to compete for the U.S. in the 2018 Winter Olympics.

Trans athletes have historically been left out of the conversation, but stars like the aforementioned Layshia Clarendon are creating visibility for trans and non-binary athletes at the top level.

But the progress for trans athletes continues to be challenged. On Tuesday (and the first day of Pride Month, no less), Florida joined a growing list of states that have signed bills to ban transgender female athletes from competing in girl’s and women’s sports at public schools.

🤝 How to show support

Sports play an important role in society and in order to get to a place where everyone feels safe and welcome, we have to work together. Apart from participating in local Pride parades and social media campaigns this month, there are more ways to show support.