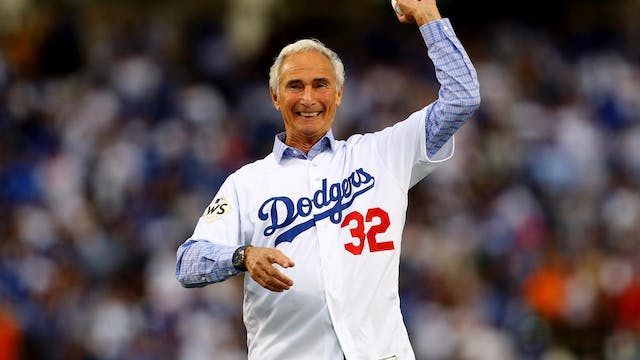 He didn’t see the burden of his identity, he saw the possibility of it.

⚾️ Dazzling on the diamond

We have to begin with aforementioned star pitcher Sandy Koufax. The youngest player ever elected to the Hall of Fame (36), Koufax garnered countless accolades and accomplishments over his 12-year career, including throwing a perfect game as well as winning three Cy Young awards and two World Series MVPs.

Koufax led the Dodgers to the World Series in 1965, his third career appearance in the Fall Classic. As the ace, Koufax was expected to pitch Game 1, but there was a conflict: the opening game was scheduled for Yom Kippur, the holiest Jewish holiday. So Koufax declined to pitch in order to observe it.

Perhaps inspired by Koufax, many other Jewish players have succeeded in the MLB over the years, including 2011 National League MVP Ryan Braun, four-time All Star Ian Kinsler and two-time defending World Series champ Joc Pederson (a big pearls guy).

Reflecting on the routine, Raisman later said, “I didn’t realize at the time I was representing not only the United States but the Jewish community.”

And we’d be remiss not to mention U.S. gymnast Kerri Strug. While she’s best known for powering through injury to complete her vault and help the U.S. win gold during the 1996 Olympics (a moment we understand differently in hindsight), what’s less commonly noted about Strug is her pride in her Jewish heritage.

Later writing about her sports success, Strug connected her accomplishments to her Jewish faith, saying in part, “I think about the attributes that helped me reach that podium: perseverance when faced with pain, years of patience and hope in an uncertain future...In my mind, those are attributes that have defined Jews throughout history.”

Here at The GIST, we know representation matters. Here are a few more notable Jewish athletes who broke barriers in their sport.

🏀Basketball: While Seattle Storm legend Sue Bird is undoubtedly the best Jewish athlete to play in the WNBA, hoops trailblazer Nancy Lieberman — who played in the W’s inaugural season at age 39 — was the very first.

🏈Football: Former New England Patriots wide receiver (WR) Julian Edelman once described himself as “Jew...ish,” but his role in Jewish sports history comes with no caveats.

While we celebrate these trailblazing athletes, it’s important to call out recent moments of anti-Jewish hate in the sports world amid an uptick of antisemitism in the world at large.

Earlier this year, basketball player Meyers Leonard (who then played for the Miami Heat) was heard on a video game stream using a horrible antisemitic slur.

These high profile moments of antisemitism are deeply troubling, but, as Edelman demonstrates, we can find comfort and a path forward in how we choose to respond. As Edelman has said, “Antisemitism is one of the oldest forms of hatred. It's rooted in ignorance and fear.”