March 17, 2020
"Chasing your dream is not a lost cause. It’s not just this thing you write in a notebook. It’s real, and it can be real for anybody."
Sports NewsVolleyball 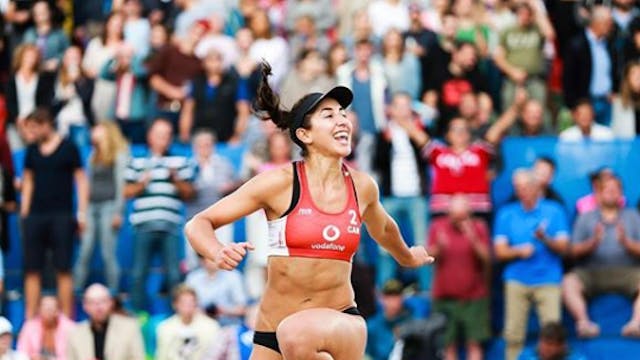 Melissa Humana-Paredes is one-half of one of Canada’s most successful beach volleyball teams of ALL TIME. Melissa is fresh off a handful of HUGE World Tour wins this season, including winning Canada’s first ever Beach Volleyball World Championship Gold. Amazing.

When Melissa isn’t advocating for pineapple on pizza (keep reading for more on that), her sights are set solely on doing something Canada’s never done before: winning a beach volleyball Olympic gold medal. Bring it on Tokyo 2020.

Let’s get into our interview with Melissa:

Lexie at The GIST (TG): Beach volleyball is a pretty unique sport to play in Canada because of our freezing weather. How did you first get into it?

Melissa Humana-Paredes (MHP): I think my entrance to beach volleyball was unorthodox, because I started playing beach volleyball first, whereas most Canadians play indoor first and then transition to beach. For me, I was opposite mostly because of my dad. He was an Olympic men’s beach volleyball coach for a few years (Editor’s note: Melissa’s father Hernán coached Canada to its first, and currently only, beach volleyball medal at the Atlanta 1996 Olympics. So cool.), and coached for the York University women’s indoor team. So, growing up, a lot of my childhood was spent going to and from beaches, and to training, with him. Then, I started competing for Team Ontario at 12 years old and worked my way up to representing Canada by age 15. 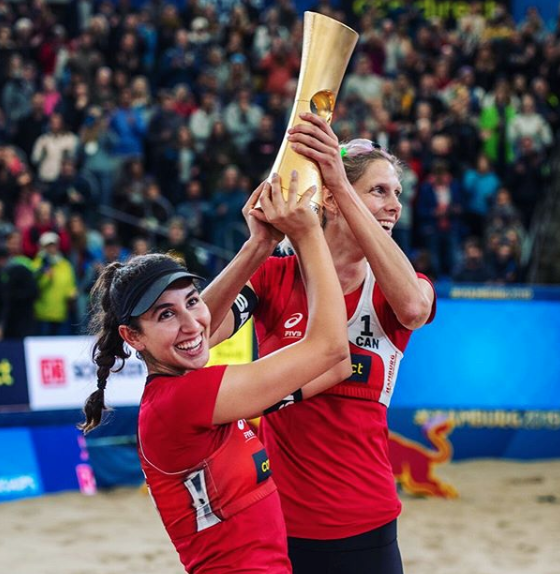 TG: How did you start playing with your partner Sarah Pavan? What is that process of finding a partner like?

MHP: In Canada, we’re lucky because we can pick our own partner to play with. Our pool of athletes to choose from isn’t as deep as it is in other countries, so it’s actually kind of incredible that we’ve done so well. When finding a partner, you’re definitely looking for someone to complement your skills, commitment and work ethic.

After the Rio 2016 Olympics, Sarah and her former beach volleyball partner Heather split, so Sarah was looking, and according to her, I was first on her list. She had seen me play, and had really watched me for a few years, so she knew what kind of player and person I was. I didn’t know how I was going to step into that big of a role (Editor’s note: Sarah was a beach volleyball quarter-finalist at the Rio 2016 Olympics), but it was a no brainer for me to say ‘yes’ to her…the rest is history, obviously.

Everyone has skills at this level, but the relationship, and managing it, is important and one of the main dictators as to whether partnerships are successful or not. Sarah and I have taught each other a lot, and it’s very give and take. It’s how we’re able to be successful.

TG: Yeah, that’s a good point. So do you work together specifically on strengthening your relationship?

MHP: Yes, it’s really important. In beach volleyball, your partner is your coach, teammate, and rock. That’s all you have. There are no substitutes. If you’re having a bad day you have to work it out with just you and your partner. They don’t need to be your best friend, but you need to have mutual respect and learn to compromise.

In the last year, Sarah and I have worked a lot on communication. We brought on a sports psychologist to help guide us in having really tough conversations that we otherwise wouldn’t want to have. We’ve been winning and finding success together lately, but even when you’re winning, you’re constantly learning. Our wins haven’t been easy, we’ve grinded our way through, so having someone to help guide tough conversations has helped bring us closer together to continue to improve. We’ve also had really tough losses that have led to serious conversations and then mental exercises for us to work on together. We’ve come out stronger, and I couldn’t be more grateful. 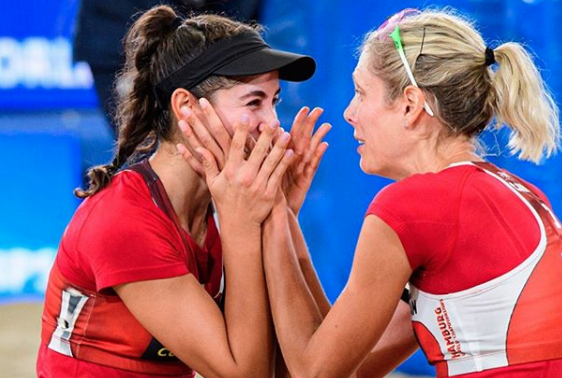 TG: That’s awesome. And SO important to work on the relationship aspect. You have set a lot of Canadian records with your wins, including first Canadians to win a World Championship, so we assume your next goal is working toward Gold in Tokyo?

MHP: Yes *Melissa chuckles*. It’s very surreal. This is something I’ve dreamt of my entire life, before I was even playing volleyball and I was just a toddler watching my dad with his team. When they brought home the bronze medal from Atlanta, I think I was 4 at the time and it really sparked an Olympic dream in me at a very young age.

Now, to be in a position to get to actually chase this dream and a Gold medal is hard to put into words…I don’t want to get ahead of myself though, and there are a lot of tournaments between now and Tokyo. We want to use this time to work on our seeding (aka ranking), which we’re fortunate to be able to do (Editor’s note: Because they won the World Championships, *nbd*, they get an automatic spot in the Olympics. Therefore, they’ll use the next ten months try to lock down the No. 1 ranking to get better matchups at the Olympics. Think of it similar to a tennis tournament).

The fact that Olympic Gold is very tangible, and not just a dream, but a realistic goal we’ve set up for ourselves to be able to pursue, it just goes to show that our process is actually working.

Chasing your dream is not a lost cause. It’s not just this thing you write in a notebook. It’s real, and it can be real for anybody.

We’ve accomplished incredible things this year that haven’t even fully hit me yet (Editor’s note: at the time of this interview, Melissa was fresh off a red-eye after winning the AVP Hawaii Open). I haven’t had time to reflect on everything, but I’m going to be able to look back on that hopefully soon and be so proud of it, and use that as momentum.

When I get there, I want to be able to walk away knowing that I gave my all and did everything I could, regardless of the outcome. If it results in a gold medal, and hopefully it will, that will be incredible. If it doesn’t, I’ll know I can still be proud of my journey and what I gave to it.

TG: That’s such an awesome mindset. Wow. So, are the resources and funding equal between the men’s and women’s programs?

MHP: For prize money, through the FIVB (International Volleyball Federation), it’s equal for men and women. In Canada, we’re carded (aka given the same government funding) equally across genders. Women actually get a bit more support in Canada because we have been more successful with our results and medal potential (Editor’s note: the answer to this question is so incredibly refreshing. About time!). Now, leading into the Olympics, Own The Podium and Sport Canada will start to prioritize women’s teams more since we have serious Olympic medal potential. And hopefully we’ll see success on the men’s side too! 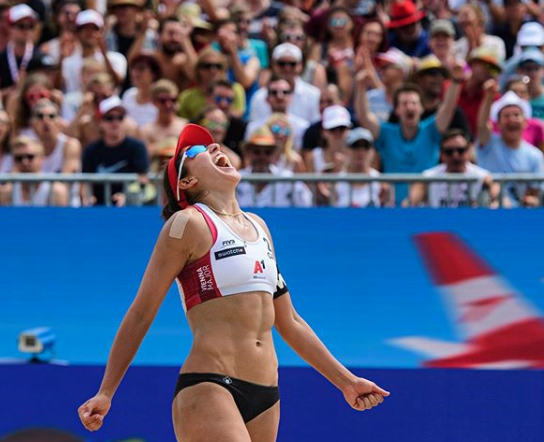 TG: With the upcoming Olympic spotlight, you and Sarah will have an even bigger platform to champion beach volleyball in Canada. How does it feel to have that opportunity?

MHP: In terms of the responsibility of being a role model, I don’t take that lightly. I used to be someone who would look up to experienced professionals and take in everything they would do, so I know what kind of impact that had on me, and how strong and how powerful that is.

I’m very careful with what kind of messages I portray, and who I want to be for young athletes. If I can have the kind of impact that Sarah has had on me to one young girl, then I’m doing my job right. I just want to help grow the sport and inspire a young generation. In beach volleyball, it’s easy for girls to feel left out and honestly a bit sexualized sometimes. It has a bad reputation for female athletes, so that’s something I’m trying to stand up for, and show that beach volleyball is inclusive, and there is room for strong women.

I don’t censor a lot of my opinions, which doesn’t always sit right with others. That doesn’t really matter to me.

It’s an honour and a privilege to have a voice, whether people agree with it or not.

If I can sleep well at night and step away from this career knowing I stayed true to my values and tried to make a difference, then I can be satisfied. 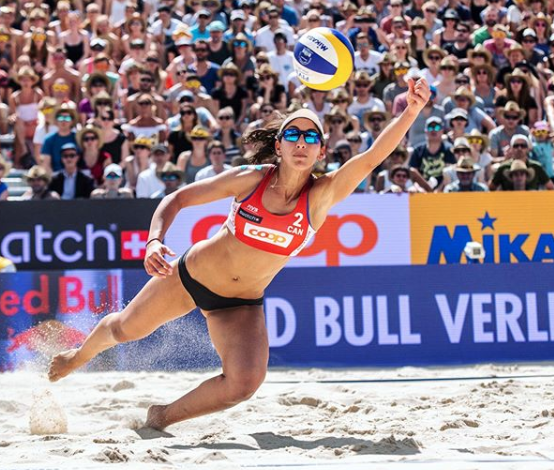 TG: After you win a huge tournament, what are you ordering first at a restaurant/bar to celebrate?

MHP: Pizza! Most people would probably say a drink, but my instinct will always be pizza…Hawaiian pizza to be exact. I’ve made my opinion very publicly known about pineapple on pizza. I’m quite outspoken about this!

TG: This is one of those opinions you mentioned that not everyone agrees with. Okay! Who would you pick as your celebrity partner in a charity match?

MHP: First person in my head is Chrissy Teigen, but on further thought, Michelle Obama.

MHP: Okay, NOW I’ll answer Chrissy Teigen...but I don’t actually feel guilty. She’s hilarious, no filter, not afraid to speak her mind. We need more people unafraid to stand up like her!

TG: 100 percent agreed.  What show are you binge watching?

TG: What one song are you listening to before you play?

MHP: I cringe saying it, but “I Don’t Care” by Ed Sheeran and Justin Bieber. We request it and it loosens us up, even Sarah starts dancing… but all-time classic is DMX right before going into the stadium. It puts me in ”beach mode” instantly. I’m ready. 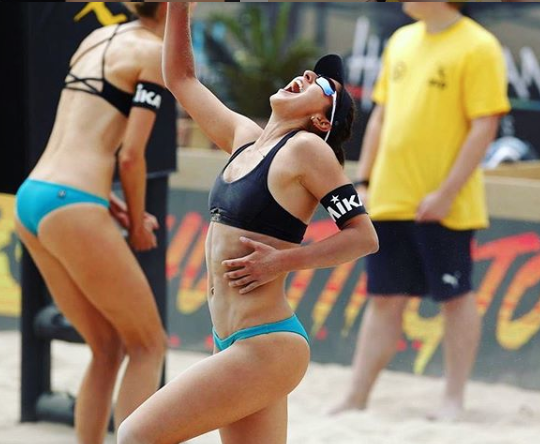