January 18, 2023
It may have been just the second weekend of 2023 meets, but the NCAA’s best vaulted expectations, with upsets and perfect 10s galore.
College SportsGymnastics 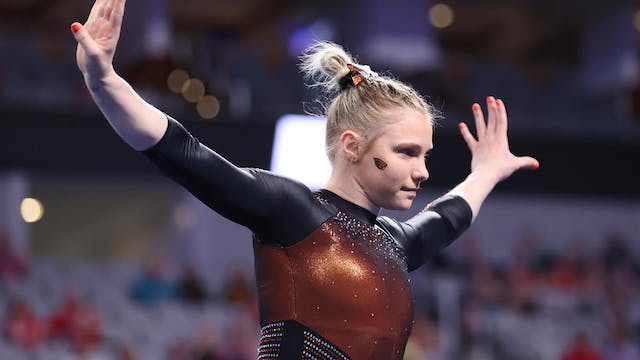 The GIST: It may have been just the second weekend of 2023 meets, but the NCAA’s best vaulted expectations, with upsets and perfect 10s galore. Here’s who stunned, and not just because of their leos’ drip.

Sweeping up tens: Then–No. 5 Auburn executed stellar performances in the weekend’s Top 5 women’s dual meet, but the No. 2 Florida Gators fully swept the top of the podium. Leanne Wong stuck not one, but two perfect 10s on the bars and beam, claiming those events and the all-around, while fellow Gator Trinity Thomas owned the vault and posted a 10 on the floor. Thrice as nice.

Teams tumbling: Falling behind two unranked squads was then–No. 35 Temple, while then-unranked Towson surprised by surpassing three ranked teams to debut in this week’s No. 26 spot. Sticking the rankings landing.

Elsewhere on the men’s mat: Though five squads of fellas began balancing a week early, the rest caught up this weekend. Friday’s West Point Open crowned the No. 2 Penn State Nittany Lions as the top squad for the ninth-straight year, as juniors Matt Cormier and Michael Artlip went one-two in the all-around.