September 12, 2022
NCAA volleyball isn’t holding back. In a sport so flush with talent that upsets are the name of the game, this weekend lived up to the hype.
College SportsVolleyball 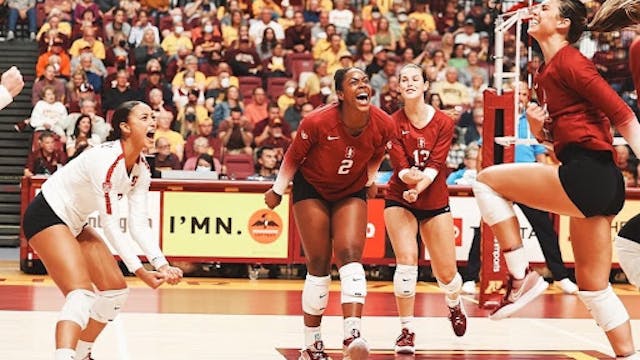 The GIST: NCAA volleyball isn’t holding back. In a sport so flush with talent that upsets are the name of the game, this weekend lived up to the hype. Grab a fork, because we have a whole stack of pancakes for you.

The devil went down to Georgia (Tech): The No. 10 BYU Cougars had their losing streak extended to three matches after both the No. 5 Georgia Tech Yellow Jackets and the No. 8 Ohio State Buckeyes swept the Cougars 3–0 at this weekend’s Georgia Tech Classic. Karma’s a you-know-what.

Meanwhile in Minneapolis: How do you respond to losing to a lower-ranked team? Well, if you’re the No. 11 Stanford Cardinal, you dethrone the No. 3 Minnesota Gophers. After dropping Friday’s match 3–2 to No. 20 Penn State, Stanford rallied to a 3–1 dub on the Gophers’ home court on Saturday.