November 16, 2022
The 64-team Division I women’s volleyball bracket will drop on November 27th, with 32 teams automatically qualifying by winning their respective conferences and the rest chosen by committee.
College SportsVolleyball 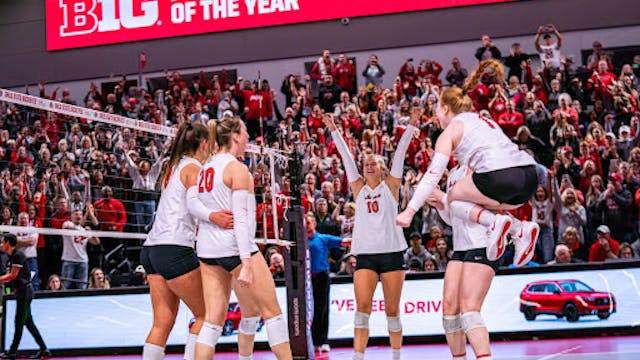 The GIST: The 64-team Division I women’s volleyball bracket will drop on November 27th, with 32 teams automatically qualifying by winning their respective conferences and the rest chosen by committee. While most conferences hold tournaments to bestow their bid, the Power Five instead book their regular-season champs a ticket to the natty.

ACC: The battle for the ACC’s best is down to the No. 7 Pitt Panthers, who are undefeated in conference play, and the No. 4 Louisville Cardinals, whose only ACC loss came against, you guessed it, the Panthers. This one could be decided on Friday, when the Cards, hoping for some sweet revenge, host Pitt at 6 p.m. ET. Mark your cal.

Big Ten: In the sport’s arguably most competitive conference, the Big Ten boasts three potential champs. The No. 6 Nebraska Cornhuskers, whose only conference losses were to the No. 5 Ohio State Buckeyes and the No. 3 Wisconsin Badgers, have the most difficult path, needing both those teams to implode in their last four matches to secure the Big Ten bid.

Big 12: The Big 12 title is the No. 1 Texas Longhorns’ to lose. Their only competition for the crown? The No. 15 Baylor Bears, who must win out — including hooking Texas on Saturday — and see Texas crumble through their last three regular season matches to claw the conference’s natty bid.

SEC: While neither Georgia nor Auburn are technically out of the SEC mix yet, it would require a miracle for either team to surpass the main contenders — the No. 10 Florida Gators and the No. 18 Kentucky Wildcats. The Gators currently have the edge, but that could change: These squads meet twice this weekend.

Pac-12: The race for the Pac-12 trophy…is not much of one. The No. 8 Stanford Cardinal are two games ahead of the No. 12 Oregon Ducks, and the Cardinal’s last four matches are against the Pac-12’s bottom four squads. Oregon better start quacking at the selection committee instead.

Elsewhere: Three other conferences also don’t host tourneys: the Big West, the AAC, where No. 23 Houston and No. 24 UCF are in the title hunt, and the WCC, where the battle continues between No. 2 San Diego, No. 17 BYU and Loyola Marymount.