December 19, 2022
To cap off their one-loss season, the Longhorns brought brooms to Omaha, NE, Saturday night, bagging their third-ever natty (and first since 2012) by sweeping fellow No. 1 seed Louisville Cardinals 25–22, 25–14, 26–24 in front of a sold-out crowd.
College SportsVolleyball 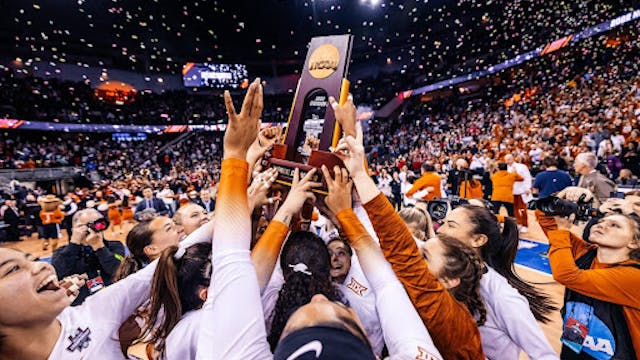 The GIST: Things aren’t just bigger in Texas, they’re dominant. To cap off their one-loss season, the Longhorns brought brooms to Omaha, NE, Saturday night, bagging their third-ever natty (and first since 2012) by sweeping fellow No. 1 seed Louisville Cardinals 25–22, 25–14, 26–24 in front of a sold-out crowd. Cut that net.

How it happened: The championship marked the ’Horns 18th (!!!) sweep in a 28-1 season that saw the squad relinquish just 14 sets all year. Saturday’s first set featured 10 kills from AVCA Player of the Year and the tourney’s Most Outstanding Player (and maybe future POTUS?) Logan Eggleston, who finished the match with 19 kills and seven digs.

The significance: The 2022 title is the ’Horns second ’ship under head coach (HC) Jerritt Elliott, who’s taken Texas to the tourney in all but one of his 22 seasons at the helm. What’s most notable about his team this year, though, is that the bulk of the starters are all-stars from last offseason’s transfer portal, making their success a lesson in smart recruiting.

What’s next: Saturday marked the end of five collegiate careers for the Longhorns, including that of Eggleston, who, according to her HC, could someday return in statue form. The good news? Three key players are returning next year and you’d better believe Coach Elliot will be leveraging the transfer portal once more.