November 02, 2022
While there are still a few fockey games left on the NCAA calendar, nearly all of the 79 Division I (DI) teams have wrapped up regular season play. The next uphill battle? Conference championships.
College SportsField HockeyCollege 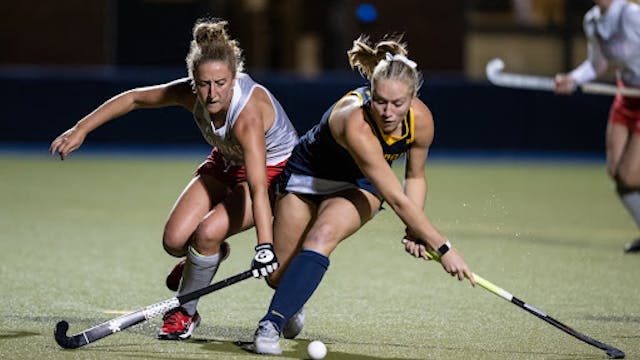 The GIST: While there are still a few fockey games left on the NCAA calendar, nearly all of the 79 Division I (DI) teams have wrapped up regular season play. The next uphill battle? Conference championships.

How it works: Eighteen teams will compete for the natty, with 10 receiving automatic bids into the tournament by winning their conference. The Ivy League doesn’t hold a conference tourney, so their bid goes to the regular season champ, but the other nine conferences have do-or-die qualifying competitions.

ACC: Though all other conference tourneys start tomorrow or Friday, the ACC held its three quarter-finals (QFs) yesterday. No. 1 UNC received the lone bye to today’s semis, where they’ll face No. 10 Syracuse, who took down No. 16 Boston College 6–2 yesterday.

Big Ten: With the most Top 25 teams of any conference, the Big Ten’s star seven — including defending natty champs No. 4 Northwestern — are all featured in the bracket. No. 3 Penn State has a bye to Friday’s semis, where they’ll face the victor of tomorrow’s No. 6 Michigan and No. 9 Iowa match.

Big East: No QF (hi)jinks here — the Big East is skipping straight to semifinals on Friday, with No. 13 Old Dominion battling No. 24 Temple and No. 19 Liberty facing No. 14 UConn to determine the squads for Sunday’s final. Easy.

Atlantic 10: Also playing the semis-or-bust game? The Atlantic 10, whose two ranked teams — No. 11 St. Joseph and No. 21 UMass Amherst — must take down unranked opponents — VCU and Lock Haven, respectively — tomorrow in order to advance to Saturday’s conference finals.

America East: With the conference’s two ranked squads — No. 17 Albany and No. 23 Maine — chillin’ until Friday’s semis, tomorrow is all about the unranked. To scoop a semis berth, Stanford must face Vermont and New Hampshire must tackle UMass Lowell in the America East tourney QFs.