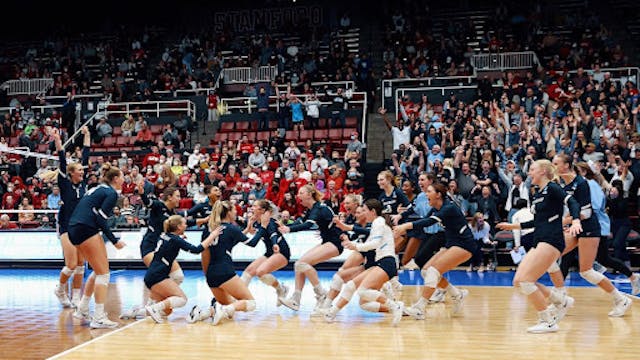 The GIST: After Saturday’s wild women’s volleyball quarter-finals sent home the last two remaining hopes for both the Pac-12 and the powerhouse Big Ten, Thursday’s semis are officially set. Here’s how squads dug out tickets to Omaha’s final four.

No. 1 Texas Longhorns: Led by outside hitter (OH) Logan Eggleston (because who else) and her 19 kills, the dominant Longhorns again proved that everything’s bigger in Texas, taking down the No. 3 Ohio State Buckeyes 3-1. Texas, who’ve played in the semis 10 times in the last 15 years, are looking primed to hook their first ’ship since 2012.

No. 1 Louisville Cardinals: In Saturday’s battle of the birds, the No. 3 Oregon Ducks put on a show, forcing the Cardinals to dig deep and come from behind to win the fourth and fifth sets for a shot at the natty. Louisville is no stranger to keeping things close this season, notching their conference title as an ACC co-champion. Always doing just enough.

No. 2 Pittsburgh Panthers: The ACC’s co–crown wearers made their own natty statement this weekend. Pitt’s five-set thriller ended defending champ No. 1 Wisconsin’s hopes at a back-to-back title and the Badgers’ 21-match win streak in dramatic fashion. With Wisconsin up 6–0 in the fifth set, the Panthers pounced, clawing all the way back to keep on dancin’.

No. 2 San Diego Toreros: Speaking of dancing, the Toreros will be groovin’ to the semis for the first time ever after knocking out the No. 1 Stanford Cardinal in five tough sets. Most impressive? OH Katie Lukes, OH Breanna Edwards, opposite Grace Frohling and middle blocker Leyla Blackwell combined for a whopping 70 (!!!) kills. Teamwork makes the dream work.