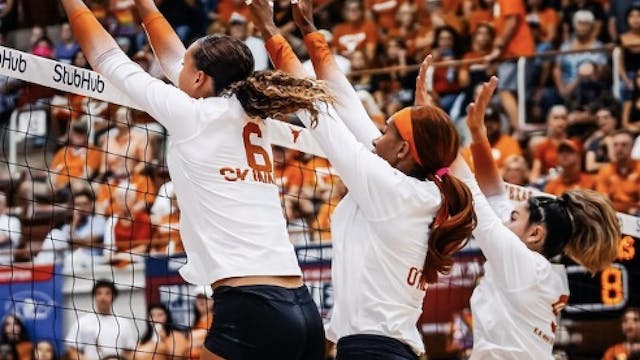 The GIST: It’s spooky season on the court, and the witches brought their brooms. Four of Wednesday’s five ranked matches ended in a 3-0 sweep, with No. 1 Texas, No. 6 Ohio State, No. 11 Georgia Tech and No. 18 Baylor brewing up the dubs. Up next? Four scary-good ranked pairings.

Friday frights: Tonight, the No. 14 Penn State Nittany Lions meet the No. 3 Nebraska Cornhuskers at 8:30 pm. ET. All three of the Lions’ losses this season have come in their last five matches, and it’ll be a tough task to break that pattern against the Huskers, who are hunting for their eighth straight W.

Momentum monsters: Two of the aforementioned sweepers face off tomorrow at 3 p.m. ET. The No. 1 Texas Longhorns head to Waco to try and cast an intrastate spell on the No. 18 Baylor Bears.

Big Ten boogey(wo)men: The No. 24 Michigan Wolverines have battled four ranked opponents this season, losing three of those matches on home court. The one W? When they visited then–No. 9 Penn State. Michigan will need that out-of-town magic when No. 5 Wisconsin plays host in Madison on Sunday.