October 17, 2022
Sports betting doesn’t have to be intimidating. We’re here to give you “the gist” with a complete sports betting glossary to help you get in the game. In other words, we’ve got your back.
Sports NewsSports Betting 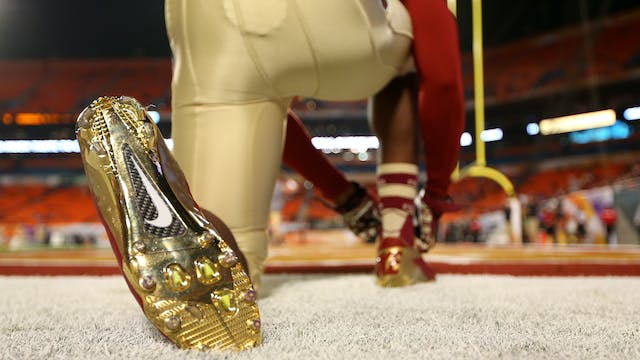 The most important part of sports betting is the odds, because that’s how you determine how much money you can win on a bet. Cha-ching.

A moneyline bet, the most basic bet in sports gambling, is simply picking the winner of a game.

This is how much a sportsbook predicts a team is going to win (-) or lose (+) by. We’ll set the scene with an NFL football example:

A push is kind of like a draw or tie, and occurs when a bet neither wins nor loses. For example, if a game happens to end in a tie and you bet on the moneyline (aka bet on a certain team to win), the bet becomes a push and you get your money back — no losses, no gains.

If you’ve ever seen a betting option with a .5 (like will a quarterback throw more than 2.5 touchdowns), this doesn’t mean half of a touchdown, this is so a sportsbook can eliminate the possibility of a push. Two touchdowns is less, three touchdowns is more — meaning this bet either wins or loses.

It’s not just what you pay to get into your favorite bar. In sports betting, this relates specifically to point spreads. When a team “covers,” it means they have beaten the point spread attached to the bet.

Sports betting lingo for whether you're going to bet the same as some one (tail) or bet the opposite (fade). You also might see the acronym "BOL" around these terms, which stands for best of luck!

Ever heard of the phrase “the house always wins”? The juice (also known as “vig”) is how a sportsbook takes a cut on a bet, kind of like a mini fee for taking your bet.

But this isn’t the case on sportsbooks. That same coin flip bet would likely be listed with odds like heads (-110) and tails (-110).

Think of a parlay like a layered bet. A parlay (no, not that parley) combines two or more bets to greatly increase your possible payout but…it greatly decreases the chance of actually winning.

You can also parlay bets across sports (a Packers and NWSL’s Portland Thorns bet, perhaps?) but most sportsbooks will cap a parlay at 10 total bets.

*Confused where +243 came from? To calculate a parlay, the odds must first be changed into decimal odds, multiplied together and then reconverted back to American odds. Luckily, sportsbooks do this complicated math for us, but you can read a full explanation here.

Put simply, a prop bet is any wager not tied directly to the outcome of the game. And the Super Bowl is a prop better’s dream.

Individual sports betting involves one specific outcome either happening or not happening (a win or a loss), but fantasy sports involve building a team of players to compete against other teams of players. Those players accumulate fantasy points based on how they perform IRL.

There are various ways to participate in fantasy sports, most commonly by drafting a team that competes across an entire season. (Much like your Fantasy Bachelor Draft.) But there are also daily fantasy sports (DFS), where the group of players you select only competes for a single game.

Want more? Check out our guides to Fantasy Football and Fantasy Hockey!

Come place a bet with The GIST

Back to Sports Betting