Week 9 NCAA football preview of the four most exciting matches 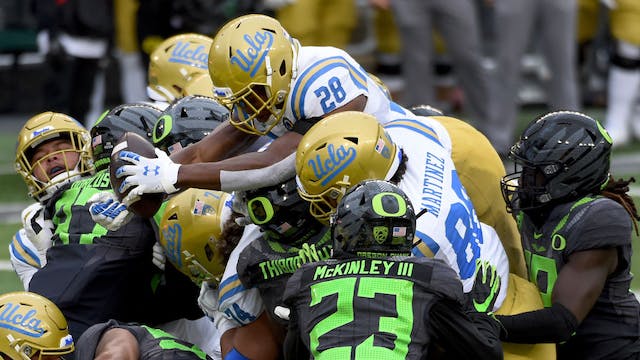 The GIST: Though the second half of the NCAA regular season is officially underway, the football picture remains a labyrinth. And while tomorrow’s Week 8 maze brings five ranked matchups to the gridiron, we’re deciphering the four most exciting.

No. 14 Syracuse Orange (6-0) vs. No. 5 Clemson Tigers (7-0), 12 p.m. ET (ABC): There are only nine undefeated teams left in Division I football, and the ACC’s two will face off tomorrow, with Syracuse seeking their first 7-0 record in 35 years. Clemson holds the longest current home win streak at a whopping 37 and will look to prove its orange reigns supreme.

No. 9 UCLA Bruins (6-0) vs. No. 10 Oregon Ducks (5-1), 3:30 p.m. ET (FOX): The hype for this game has been so high all week that even Oregon women’s basketball legend Sabrina Ionescu is getting in on the GameDay action. The last two Pac-12 teams without a conference loss are both coming off a bye week and looking to be crowned the best in the west. What’s more, Bruin head coach (HC) Chip Kelly used to lead the Ducks.

No. 24 Mississippi State Bulldogs (5-2) vs. No. 6 Alabama Crimson Tide (6-1), 7 p.m. ET (ESPN): They might be the Tide and the Bulldogs, but this SEC game could shape up to be a battle of the bad news bears: Bama’s already notched an FBS–leading 66 penalties this season, and Mississippi State’s not far behind with 48.

No. 17 Kansas State Wildcats (5-1) vs. No. 8 TCU Horned Frogs (6-0), 8 p.m. ET (FS1): The undefeated Frogs have already made program history this season by taking down three ranked opponents in three weeks, all led by the third-best offense — whose drives end in TD 46% of the time — in the country.