September 12, 2022
Week 2, inspired by Drake, was upset central. Seven of the AP Top 25 teams lost on Saturday, including three in the top 10.
College SportsFootball 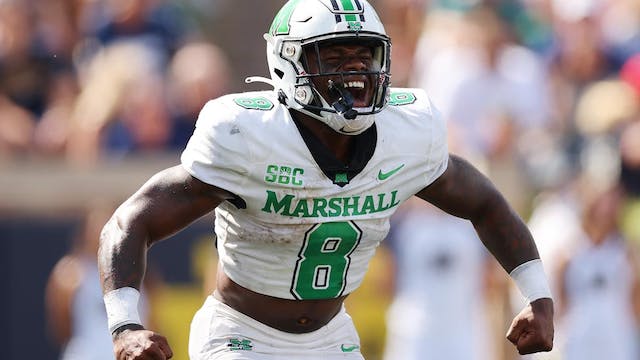 The GIST: Week 2, inspired by Drake, was upset central. Seven of the AP Top 25 teams lost on Saturday, including three in the top 10. Though then–No. 1 Alabama just managed to save face, three squads dropped to lower-ranked foes, while four fell to unranked opponents. Spicy.

An empty pot o’ gold: For the first time since 2011, Notre Dame is 0-2 to start the season. The then–No. 8 Irish lost 26–21 to unranked Marshall’s Thundering Herd after defensive back Steven Gilmore made a dramatic fourth-quarter pick-six.

Running up that hill: In another massive Sun Belt payday, the Appalachian State Mountaineers climbed to a 17–14 win over then–No. 6 Texas A&M (TAMU). The now–No. 24 TAMU Aggies scored just one touchdown (TD), while App State maintained possession for 41 of the game’s 60 minutes. We’re laughing, too, coach.

Clap if you love OTs: The then–No. 21 BYU Cougars needed two OTs to claw their way to an upset win over the then–No. 9 Baylor Bears, nabbing their first home win against a top-10 team since 1990 in the process.

Highlight of the weekend: NCAA football always serves up “what just happened?” plays, but this week we can’t stop watching Louisville Cardinal defensive back Jarvis Brownlee’s fourth-quarter mid-air endzone interception to secure the dub over the UCF Knights. Unreal.