January 11, 2023
As mentioned, the No. 1 Bulldogs dissected the No. 3 TCU Horned Frogs Monday night to take the natty for the second consecutive year. Turns out their bark is as bad as their bite.
College SportsFootball 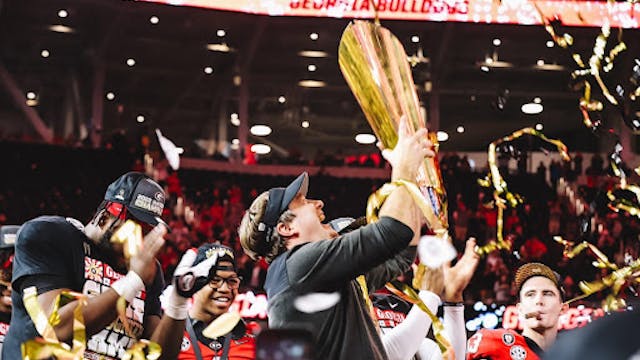 The GIST: Georgia has entered its dynasty era. As mentioned, the No. 1 Bulldogs dissected the No. 3 TCU Horned Frogs Monday night to take the natty for the second consecutive year. Turns out their bark is as bad as their bite.

How it happened: The CFP semis may have been tight battles, but the championship was a bloodbath. The Horned Frogs’ end zone remained empty except for TCU’s Heisman finalist QB Max Duggan’s first-quarter TD, while the Bulldogs, led by the aforementioned fellow Heisman finalist Bennett, owned the field.

The significance: This one broke all the records. Georgia is now the only back-to-back champ in the CFP era and just the third FBS squad ever to finish with a perfect 15-0 season. The 58-point dub wasn’t just the largest margin of victory in natty history, it was the biggest for any bowl game ever.

What’s next: Given that Georgia has become an incubator for NFL talent, the Bulldogs will lose some big names, like the expected top defensive pick, lineman Jalen Carter, star tight end (TE) Darnell Washington, and Bennett to the pros. Even so, the ’Dawgs are already projected to three-peat next year, a feat unheard of since the 1930s.