September 02, 2022
Although the NCAA football season officially started last weekend with Week 0, the party is properly kicking off this weekend thanks to some crucial Week 1 ranked matchups.
College SportsFootball 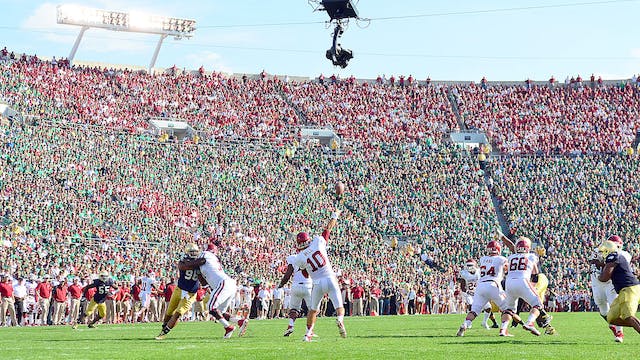 The GIST: Although the NCAA football season officially started last weekend with Week 0, the party is properly kicking off this weekend thanks to some crucial Week 1 ranked matchups. So, catch up on the set-up, prep your tailgate and dig into tomorrow’s top games.

No. 11 Oregon Ducks vs. No. 3 Georgia Bulldogs, 3:30 p.m. ET (ABC): The defending champ Bulldogs lost 15 players to the NFL and their defensive coordinator Dan Lanning…to Oregon. The Ducks new HC may be familiar with Georgia’s moves, but the Bulldogs are no stranger to his strategies. Bring on the drama.

No. 23 Cincinnati Bearcats vs. No. 19 Arkansas Razorbacks, 3:30 p.m. ET (ESPN): Despite becoming the only non–Power Five school to ever make the CFP last season, this year’s Bearcats are a major question mark.

No. 5 Notre Dame Fighting Irish vs. No. 2 Ohio State Buckeyes, 7:30 p.m. ET (ABC): The weekend’s only top-five matchup has the Buckeyes — led by offensive Heisman contenders QB C.J. Stroud and running back TreVeyon Henderson — hosting the defensive-minded Irish who will need all their luck plus Rudy to nab a dub.

The best of the rest: Tomorrow aside, tonight will be a family affair when the Western Michigan Broncos face the No. 15 Michigan State Spartans in East Lansing — Bronco offensive coordinator Jeff Thorne is the father of Spartan QB Payton Thorne. Catch their reunion at 7 p.m. ET on ESPN.