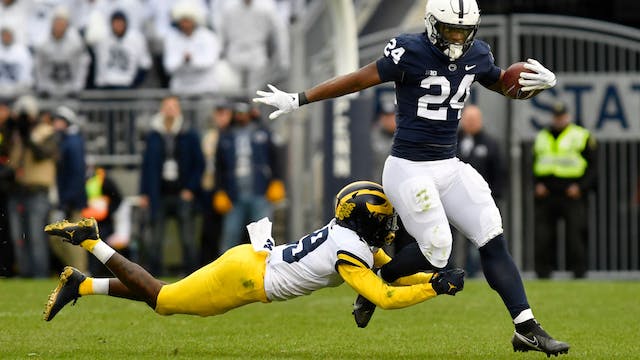 The GIST: Mornings might be for coffee and contemplation, but Saturday afternoons (and evenings) are for college football. We’re breaking down four not-to-miss Week 7 gridiron games, including three of the six ranked matchups. No twinkle lights decoding required.

No. 19 Kansas Jayhawks (5-1) vs. Oklahoma Sooners (3-3), 12 p.m. ET (ESPN2): The Big 12 is officially in the upside down. Though the (former powerhouse) Sooners have won 44 of their last 50 games against the Jayhawks, unranked Oklahoma was shut out by Texas last week and now must host a formidable Kansas squad.

No. 10 Penn State Nittany Lions (5-0) vs. No. 5 Michigan Wolverines (6-0), 12 p.m. ET (FOX): In tomorrow’s bitchin’ battle between two undefeated Big Ten teams, the Nittany Lions will rely on their tough defense, which has allowed less than 100 rushing yards on average, when they visit The Big House to take on quarterback (QB) J.J. McCarthy, who hasn’t yet faced a ranked team. Talk about a test.

No. 3 Alabama Crimson Tide (6-0) vs. No. 6 Tennessee Volunteers (5-0), 3:30 p.m. ET (CBS): The Tide is somehow still undefeated. Head coach (HC) Nick Saban’s squad just squeaked by Texas and Texas A&M this season, and star QB Bryce Young is questionable to play. But Saban’s Bama has never lost to the Vols and their defense remains exceptional.