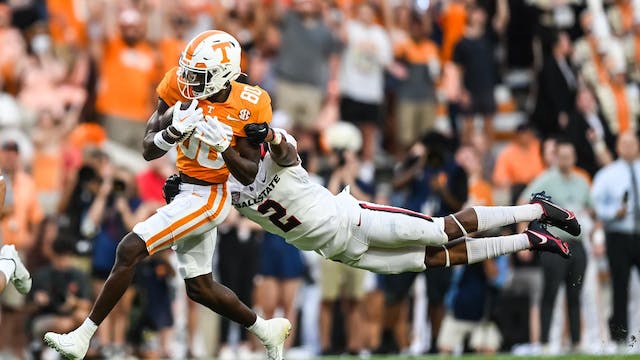 The GIST: Week 1 football brought us upsets, blowouts, a 62-point fourth quarter and a touchdown-less game, all leading to yesterday’s Week 2 poll mayhem. Let’s dig into who made massive moves and who punted their poll positions.

Who’s up, who’s out: While four of the preseason top five remain the same, the long weekend saw the No. 8 Michigan Wolverines jump to No. 4 after a 51–7 win over Colorado State. And they’re not the only team leapfrogging — now–No. 10 USC and new–No. 21 BYU also improved by four spots, and Arkansas took over as No. 16 after defeating now-unranked Cincinnati.

The newcomers: Who’s taking over the newly-vacated rankings? The Florida Gators and the Tennessee Vols, clocking in at Nos. 12 and 24, respectively. The Vols made the Ball State Cardinals fly away with a strong 59–10 showing last week.

A new Cinderella?: The glass slipper is officially off the Cincinnati Bearcats. And while college football isn’t often rife with Cinderella stories, a few teams are vying for this year’s crown. No. 25 Houston could take names this season, and with most of its 2021 offensive line returning, No. 21 BYU may make a case for itself.