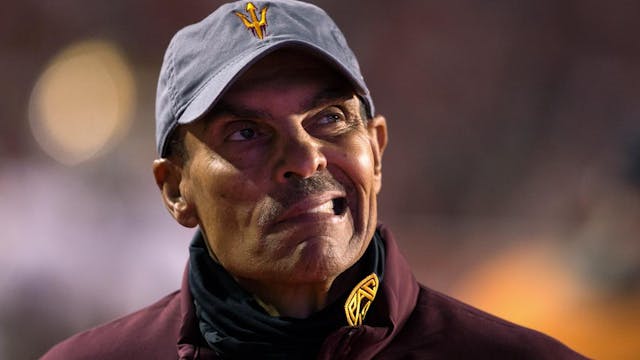 On-field failures: When 68-year-old Edwards was hired in 2017, he hadn’t coached college football in 28 years, and NFL ball in nine. Anderson, Edwards’ former agent, brought in the then–ESPN analyst to serve as Arizona State’s HC and enact an “NFL approach” where the HC is the central leader and delegates recruitment tasks to other, dependable coaches.

Off-field violations: The ongoing NCAA investigation centers around recruiting practices during the pandemic’s 14-month dead period when all such activities were banned. Under Edwards’ eye, defensive coordinator Antonio Pierce encouraged such blatant recruitment rule-breaking that other staffers ended up whistleblowing the violations to the NCAA.

What’s next: The NCAA’s report and possible sanctions on Arizona State won’t arrive anytime soon. In the interim, running back coach Shaun Aguano will lead the Sun Devils as they search for permanent, trustworthy leadership. Given the inevitable bomb, though, enticing a good coach could be as hard as finding water in the Arizona desert.