Frogs vs. ’Dawgs - the last college football game until August 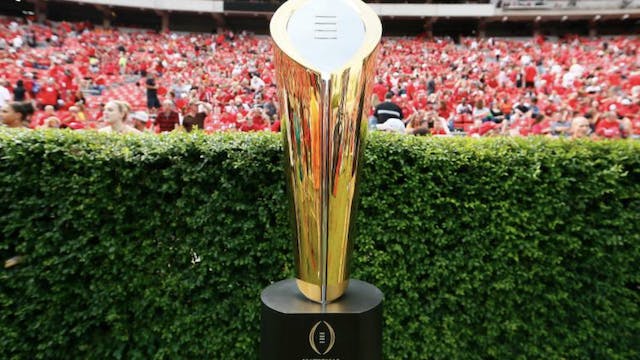 The NCAA Division 1 (DI) Football Bowl Subdivision (FBS) — the cream of the college football crop — includes 131 teams spread out across 10 DI conferences. But only four squads make the CFP.

After battling through 12 regular season games as well as conference championships, the 13-member CFP committee (which notably includes just one woman *eye roll*) selected the No. 1 Georgia Bulldogs, No. 2 Michigan Wolverines, No. 3 TCU Horned Frogs and No. 4 Ohio State Buckeyes to play in the CFP based on several factors, including team records, strength of schedule and rankings.

To call the Bulldogs the favorite is an understatement. They’re the defending champs and the only remaining undefeated FBS team. If they win tomorrow, they’ll be the first-ever back-to-back victors in the CFP era (since 2014).

The season: The SEC champs opened their season with a 49–3 statement dub over the Oregon Ducks and never looked back, outscoring their 12 regular season opponents by an average of 27 points. Talk about bringing the bite.

The semifinal: The ’Dawgs barely maintained their perfect CFP semis record by topping the Buckeyes in a Peach Bowl nailbiter. After entering the fourth quarter down 14 points, Georgia stormed back to take a 42–41 lead with less than a minute on the clock, advancing to the ’ship thanks to Ohio State’s shanked 50-yard game-winning field goal attempt

The quarterback (QB): Stetson Bennett may have been an underdawg when he walked on to the team in 2017, but the 2022 Heisman finalist boasts a 28-3 record as a starter and just so happens to be last year’s natty championship MVP.

Key to success: Defense is the name of this dynasty’s game. Georgia boasts one of the most formidable Ds in the country, led by defensive tackle (and projected top-three NFL draft pick) Jalen Carter. If Carter plays better than he did in the semi, expect the ’Dawgs to collar the coveted hardware for the second straight year.

Now enter, the chaos-makers. Not only has No. 3 TCU never made the CFP before, but the Horned Frogs were expected to land seventh in the Big 12 after finishing last season with a dismal 5-7 record. With new HC Sonny Dykes at the helm, the small (by Power Five standards) Texas school has somehow fielded Frogs who’ve turned into the unlikely princes of the gridiron.

The season: These maestros of mayhem needed five second-half comeback games to eke out their undefeated regular season. And they did so against the game’s best — they posted five Ws over ranked opponents, compared to Georgia’s three. TCU hypnotoad the CFP committee so much that they maintained their No. 3 spot even after losing the Big 12 title game 31–28.

The semifinal: The Frogs silenced all naysayers in their CFP semi, leading previously undefeated No. 2 Michigan from wire to wire to take the 51–45 win. The highest combined scoring Fiesta Bowl in history — featuring a 44-point third quarter (!!!) — was defined by physicality, explosive plays and speed. Turns out, Frogs are faster than Wolverines.

The QB: Now a Heisman finalist, Max Duggan wasn’t even supposed to be TCU’s starter. The Frogs turned to Duggan in their season opener after their original QB1, Chandler Morris, sprained his knee.

Key to success: If TCU wants to bring bedlam to the Bulldogs and hoist their first national title since 1938, the Frogs will need to protect Duggan from Georgia’s sack-hungry defense.