I can show you the world 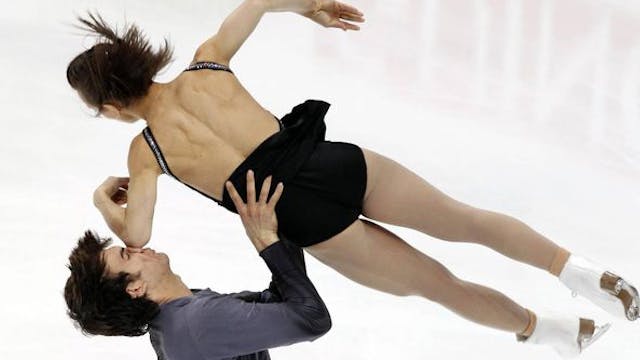 The GIST: Thanks to COVID-19, we missed out on the 2020 World Figure Skating Championships that were set to take place last week in Montreal, Quebec. So, in honor of the shining, shimmering and splendid sport, we’re profiling our top five figure skating moments from women’s singles, pairs and ice dance past.

5. Sometimes figure skaters get a bad rap for not being tough. Well, Canadian pairs figure skater Eric Radford proved the haters wrong at the 2011 World Championships in Moscow, after his partner, Meagan Duhamel, elbowed him in the face during a triple twist that went awry early in their short program.

4. After winning the ice dance gold medal by the skin of their teeth at the 2018 PyeongChang Winter Olympics (thanks to one of the best programs of all time), Canadians Tessa Virtue and Scott Moir became the most decorated figure skaters (with five medals) in Olympic history. And, no, despite the world’s pleas, the two are not a couple.

3. Our number three spot is dedicated to American singles skater Nancy Kerrigan, who stunned the world with a silver-medal performance at the 1994 Lillehammer Winter Olympics, just seven weeks after suffering a clubbing to her right knee from a brutal attack planned by rival Tonya Harding’s ex-hubby Jeff Gillooly. If you haven’t watched I, Tonya yet, you need to (and even if you have, watch it again, because let’s face it, you have the time).

2. We can’t have a figure-skating list and not talk about American sweethearts Michelle Kwan and Tara Lipinski. At the 1998 Nagano Olympics, 15-year-old Tara just edged out Michelle to win the women’s singles gold, becoming the youngest figure skater to win an Olympic gold medal at the time.

1. To cap off our list, we’re throwing it back to the 2002 Salt Lake City Olympics, where one of the biggest judging scandals in figure skating history initially deprived Canadian pair (and former IRL couple) Jamie Salé and David Pelletier of a gold medal.