January 06, 2023
You’re not trippin’, but the men of college hoops are. While most of the season has seen squads tightly battle ranked opponents, the string of stumbles to unranked foes is ruining ranked teams’ New Year’s resolutions.
College SportsBasketball 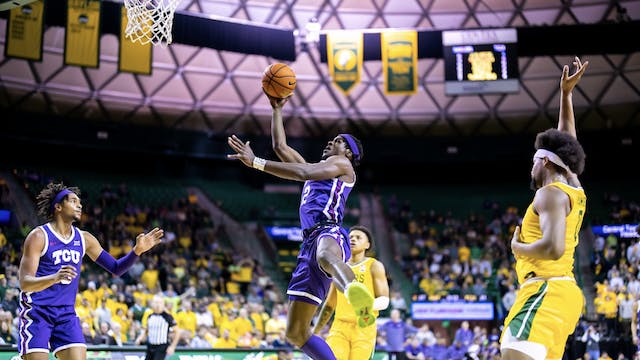 The GIST: You’re not trippin’, but the men of college hoops are. While most of the season has seen squads tightly battle ranked opponents, the string of stumbles to unranked foes is ruining ranked teams’ New Year’s resolutions.

On Wednesdays, we watch upsets: Four ranked teams — No. 4 UConn, No. 12 Miami, No. 16 Duke and No. 22 Auburn suffered upset losses Wednesday night. Though Miami kept it close, allowing Georgia Tech their first ACC win 76–70, Duke’s Blue Devils endured a 84–60 thrashing at the claws of the NC State Wolfpack. Sheesh.

Not just a football school: Wednesday’s biggest highlight wasn’t an upset, but a bucket brigade. No. 17 TCU proved that Horned Frogs do more than score epic touchdowns by narrowly defeating No. 19 Baylor 88–87, dropping the final dime in the last four seconds.

That’s so college: It’s not the nightmare of being naked in class, but the Texas A&M Aggies did show up to their game against Florida without their jerseys on Wednesday. After racing to collect them from the hotel, the Aggies were penalized for delaying the game…meaning Florida shot a free throw before tip-off. Hilarious.

Elsewhere in women’s hoops: On the gals’ court, the previously undefeated No. 24 St. John’s fell 72–51 to Seton Hall on Wednesday. Following the trend, No. 22 UNC extended their losing streak to four games with a tough L against Miami last night.