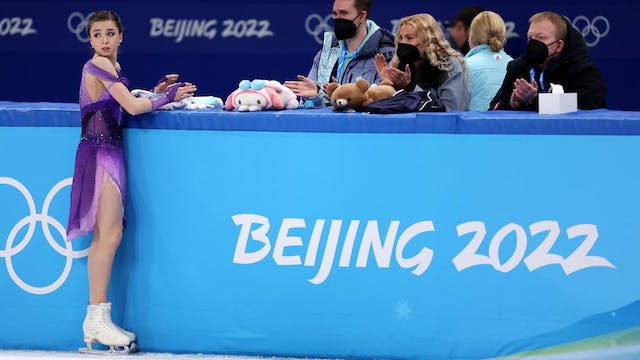 The GIST: As expected, Kamila Valieva — the 15-year-old ROC figure skater embroiled in a doping scandal — finished first in the women’s singles short program this morning and qualified for Thursday’s free skate. Also as expected, the most important news is coming off the ice.

Valieva’s response: While we’ve covered how various sporting institutions have responded to this deeply troubling situation, there’s been little focus on Valieva’s own response. “It’s as if I don’t have any emotions left,” she said. “I am happy but at the same time I am emotionally tired.” As if she wasn’t already under enough pressure.

Zooming out: 2018 medalist and current coach for American Mariah Bell, Adam Rippon summed it up well on Twitter, writing, “You can be heartbroken for this 15-year-old girl and at the same time be heartbroken that every other skater in this event will have to compete knowing that the competition is not clean.”

What’s next: The women’s singles final is set for Thursday at 5 a.m. ET, but this story won’t end there. Canceling a medal ceremony can’t hide the lasting impact this scandal will have on the (already damaged) integrity of the Games.