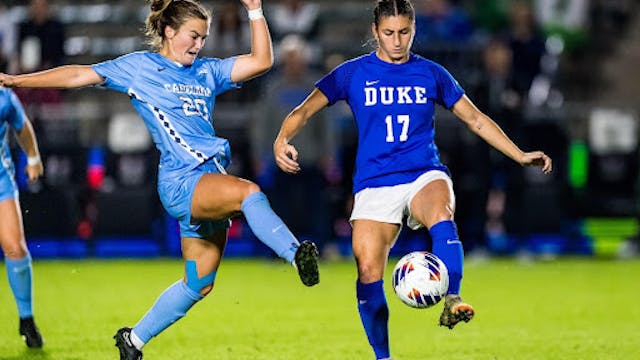 The GIST: After yesterday’s epic semifinal battles, the Power Five pitches are ready for Sunday’s conference championships. Here’s how it happened.

ACC: The No. 8 Duke Blue Devils did their damndest yesterday, taking No. 2 UNC through 110 minutes of scoreless hell before falling to the Tar Heels in penalty kicks. Facing UNC in Sunday’s 12 p.m. ET final? Reigning natty champ No. 5 Florida State, who performed a semifinal exorcism of their own, also besting No. 4 Notre Dame in penalty kicks last night.

Big Ten: Sunday’s final pits a dynasty against a newcomer. Eight-time conference tourney champ No. 21 Penn State beat No. 12 Northwestern 2–0 in yesterday’s semifinal. They’ll face No. 6 Michigan State, who took down Nebraska 2–1 to book their first-ever ticket to the final. Tune into BTN at 2 p.m. ET to see if beginner’s luck is real.

Big 12: It’s no secret that West Virginia can climb, but the Mountaineers shocked No. 16 Texas yesterday, knocking the top seed out of the tourney with a 1–0 dub. Their next uphill battle? No. 17 TCU, whose 3–0 win over Oklahoma yesterday set Sunday’s 2 p.m. ET final stage.

SEC: To no one’s surprise, top-seeded No. 3 Alabama will kick it in Sunday’s 2 p.m. ET final after taking down Vanderbilt 2–1 in yesterday’s semi. Meeting them on the pitch? No. 13 South Carolina, who battled Georgia through a double-overtime 1–1 draw, but nabbed both the dub in penalty kicks and the chance to make the Crimson bleed.

Pac-12: The Pac-12 may not host a tourney, but that means their regular season champ earns the NCAA tourney bid. That season ends tonight, with the No. 1 UCLA Bruins playing No. 14 USC, and the No. 7 Stanford Cardinal facing Cal. If the Bruins win, they’ll be champs regardless of the Cardinal’s outcome.

It’s raining men: The fellas will also kick off their conference tourneys this weekend. There are only two Power Five tourneys: The Big Ten, whose quarter-finals (QFs) begin today, and the ACC, whose QF action kicks off Sunday. Hope you like gouda.