The NFL playoffs kick off with 14 squads

January 14, 2023
The NFL playoffs kick off this afternoon with 14 squads — seven from each conference — contending to hoist the coveted Vince Lombardi trophy.
Sports NewsFootball 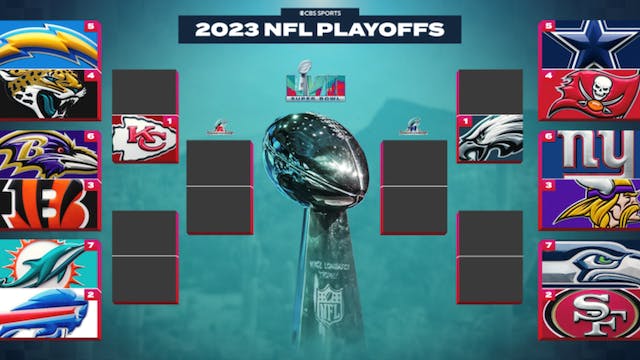 This year marks the third edition of the NFL’s expanded playoff format, giving nearly half of the league’s 32 teams a chance at a Super Bowl run. The postseason opens with a “super” wild card weekend slate featuring six (!!!) games today through Monday.

The Kansas City Chiefs and Philadelphia Eagles secured the No. 1 seeds in the AFC and NFC, respectively, earning them byes to next week’s divisional round. While they enjoy their well-deserved rest, 12 teams will be in action over the next three days.

Justin Jefferson, Minnesota Vikings, WR: If there’s one thing the Vikes are going to do, it’s get Jefferson the ball. He dropped jaws with the catch of the year in November, and there’s no telling what other acrobatics he has up his sleeve.

Josh Allen, Buffalo Bills, QB: The preseason MVP favorite continues to dominate with both his arm and his legs, presenting a unique (and near impossible) challenge for opposing defenses. And he somehow gets even better with pressure on — Allen had a whopping nine touchdowns (TDs) in two playoff games last season.

Christian McCaffrey, San Francisco 49ers, Running back (RB): With the Niners down to their third string QB, their blockbuster midseason trade for the Pro Bowl RB has come in handy. But it’s not just his run game opponents need to worry about. McCaffrey’s also a receiving threat, with five TDs through the air this year. What can’t he do?

What would an NFL playoff preview be without a Super Bowl prediction? With so many of the NFC contenders entering on shaky footing, we have to go with the high flying top-seeded Eagles, who boast MVP favorite, QB Jalen Hurts.