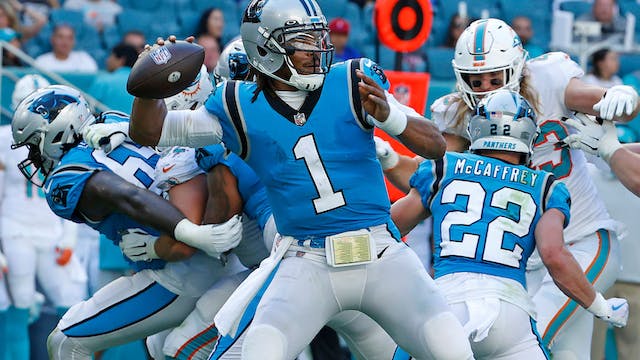 Do you get déjà vu?: Stop us if you heard this one before, but Tampa Bay Buccaneers quarterback (QB) Tom Brady led his squad to a 38–31 comeback win over the Indianapolis Colts yesterday. Because of course.

Oh no no no no no: We promised lowlights, and this one’s a doozy. The New York Jets defeated the Houston Texans 21–14 yesterday, but Jets QB Zach Wilson was part of a brutal interception when he threw the ball off of his teammate’s back and into the Texans defender's hands. You have to see it to believe it.

Riding the pine: He’s baaack...on the sidelines. After a stellar performance in his first start of the season last week, Carolina Panthers QB Cam Newton was benched yesterday after throwing two interceptions in a rough 33–10 loss to the Miami Dolphins.

Striking gold: The San Francisco 49ers extended their win streak to three, thanks to yesterday’s 34–26 win over the Minnesota Vikings. And look away Vikings fans, because there’s more bad news: star running back (RB) Dalvin Cook was carted off the field with a shoulder injury. Scary.