September 26, 2022
The NFL Players Association is looking into Miami quarterback (QB) Tua Tagovailoa’s (TUNG-o-vai-LOA) concussion evaluation after the QB returned to the field despite suffering a scary hit.
Sports NewsFootball 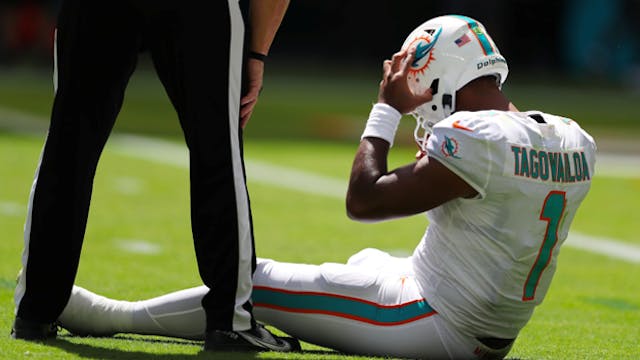 Under investigation: The Miami Dolphins overcame a butt punt (yes, you need to see this) to knock off the Super Bowl favorite Buffalo Bills 21–19 yesterday, but the Dolphins could be in hot water. The NFL Players Association is looking into Miami quarterback (QB) Tua Tagovailoa’s (TUNG-o-vai-LOA) concussion evaluation after the QB returned to the field despite suffering a scary hit. Stay tuned.

Upset alert: The Indianapolis Colts handed the Kansas City Chiefs a stunning 20–17 loss, with Colts safety Rodney McLeod picking off KC QB Patrick Mahomes in the fourth quarter to give Indy their first win of the season.

Battle of the drama queens: QB Aaron Rodgers and the Green Bay Packers hung on to beat QB Tom Brady and the Tampa Bay Buccaneers 14–12 in what could be the last matchup between these two NFL legends. Hopefully no tablets were harmed in the making of this L.

Injury report: Bills superstar QB Josh Allen says he’s fine after heading to the X-ray room to have his hand checked following yesterday’s loss. However, the same can’t be said for New England Patriots QB Mac Jones, who was obviously not fine after being carried off the field with an ankle injury during their 37–26 loss to the Baltimore Ravens. Brutal.

Looking ahead: It’ll be an NFC East battle in tonight’s Monday Night Football clash, with the shockingly 2-0 NY Giants taking on the 1-1 Dallas Cowboys. Dallas QB Dak Prescott is still on the mend, so all eyes will be on the Cowboys’ defense to hold Giants QB Daniel Jones and running back Saquon Barkley at bay. Kickoff is set for 8:15 p.m. ET.