November 16, 2022
After a truly chaotic season with squads yo-yoing around the rankings, the men’s College Cup bracket is finally set, with Monday’s committee reveal setting 48 teams on the path to Cary, NC.
College SportsSoccer 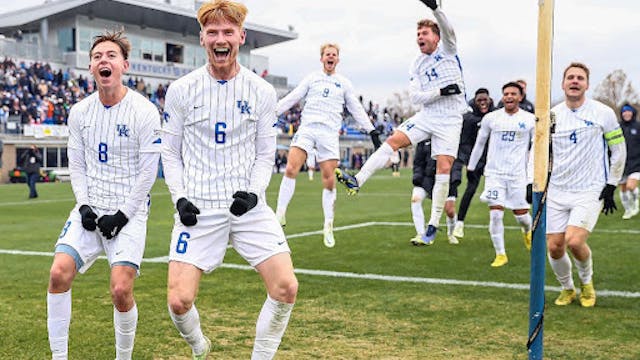 The GIST: After a truly chaotic season with squads yo-yoing around the rankings, the men’s College Cup bracket is finally set, with Monday’s committee reveal setting 48 teams on the path to Cary, NC.

How it works: The top 16 squads are seeded and receive the added bonus of a bye through to Sunday’s second round. For the remaining 32 teams, however, the action begins on the pitch tomorrow, and the road to the trophy is arguably rougher than scoring Taylor Swift tickets.

The favorites: The No. 1 seed went to Sun Belt champs Kentucky, the lone undefeated squad heading into the tourney. The Pac-12 champ Washington Huskies — who could have been No. 1 if they hadn’t lost their very last regular season match — are kicking it at No. 2, matching their 2021 natty runner-up position as well.

The dark horses: With 36 consecutive tourney berths and eight national championships under their belt, it’s difficult to call No. 13–seed Indiana an underdog, but inconsistencies slid the Hoosiers out of the top 10 this season.

Key round one matchups: Of tomorrow’s 16 games, the 4 p.m. ET bout between Denver and San Diego and Wake Forest’s 6 p.m. ET battle against Ohio State are the ones to watch.