The latest and wildest in NCAA college hoops

January 18, 2023
Wild doesn’t begin to cover recent college hoops, so we’re breaking down everything you need to know from the women’s and men’s court — no twinkle light decoding required.
College SportsBasketball 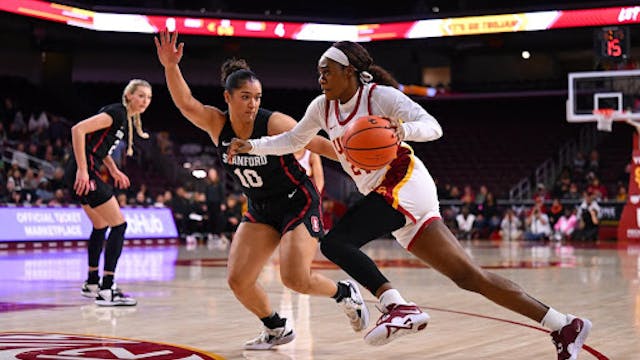 The GIST: Wild doesn’t begin to cover recent college hoops, so we’re breaking down everything you need to know from the women’s and men’s court — no twinkle light decoding required.

Historic falls: Of the five women’s upsets on Sunday, the USC Trojans’ 55–46 win over the then–No. 2 Stanford Cardinal broke the most records. USC’s first dub over the Cardinal since 2014 snapped now–No. 4 Stanford’s 51-game win streak over unranked foes, which had been the longest active DI streak. Bitchin’.

Buzzer beater: Putting the squad on her shoulders Monday night, Arkansas guard Mykayla Daniels raced down the court to sink the winning three at the final buzzer, securing the 84–81 victory over Vanderbilt and lifting Arkansas to their best start in SEC play in 17 seasons.

Stars in Storrs: A pair of pro icons — NBA Hall of Famer Ray Allen and WNBA free agent Tina “Rock in the paint” Charles — attended No. 5 UConn’s practice this weekend. The 2012 WNBA MVP and former Huskie even laced up her kicks for some 1-on-1 with forward Aaliyah Edwards. Put her in, coach — the Huskies’ injury-depleted roster could use a pro assist.

Fellas wild out: Eleven isn’t just the name of our fave ’80s heroine, it’s also the number of men’s teams in the Top 25 who lost on Saturday alone (nine to unranked opponents), tying the single day record for ranked losses. Two more squads joined the chaos on Sunday, bringing the weekend after Friday the 13th’s ranked tumble total to 13. Eerie.

Raider from beyond the arc: Carving his name in the NCAA history books this weekend was Detroit Mercy guard Antoine Davis, who set a new DI record after sinking his 510th (!!!) three-pointer on Saturday. The fifth-year Titan of threes’ 3,232 career points is just 18 away from becoming the second all-time NCAA scorer.

What to watch: See if this week continues bringing stranger things to college hoops when the gals of No. 21 Illinois host No. 6 Indiana tonight at 8 p.m. ET on BTN+. Then tune your second screen to CBS Sports Network at 9 p.m. ET to see the fellas of No. 22 Providence face No. 20 Marquette.