October 17, 2022
Football wasn’t the only topsy-turvy sport this weekend — from soccer to hockey, no event escaped the unexpected.
College SportsVolleyballHockeyField HockeySoccer 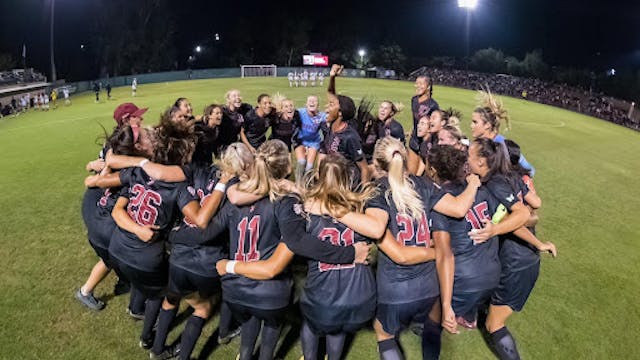 The GIST: Football wasn’t the only topsy-turvy sport this weekend — from soccer to hockey, no event escaped the unexpected.

⚽️ Soccer: In the weekend’s biggest shocker, the No. 1 UCLA women are no longer undefeated, falling 1–0 to No. 9 Stanford on Friday thanks to Cardinal defender Elise Evans’ goal. No. 14 Portland also lost 4–1 to unranked BYU, while No. 24 South Carolina stumbled 2–1 to unranked Vanderbilt and their never-give-up defense.

🏑 Field hockey: It was a rough road trip for the No. 5 Iowa Hawkeyes, who head back home with not one, but two 2–0 losses to lower-ranked opponents. Both No. 21 Ohio State and No. 10 Michigan held the Hawkeyes scoreless this weekend. Up next? They’ll have to plan some better (hi)jinks for Michigan, who travel to Iowa City on Sunday for a rematch.

🏒 Men’s hockey: Lower-ranked teams had the upper hand on the ice this weekend, too, with No. 1 Denver (the defending national champs!) falling twice to No. 13 Massachusetts — 4–2 on Friday and 3–0 on Saturday. A gongshow.

🏐 Women’s volleyball: A whopping five ranked squads lost to unranked teams this weekend, but none were more surprising than Maryland’s three-set sweep of No. 9 Purdue yesterday. The Boilermakers, whose only other losses this season were at the nets of two Top 10 opponents, must rally if they hope to succeed against No. 3 Nebraska on Wednesday.