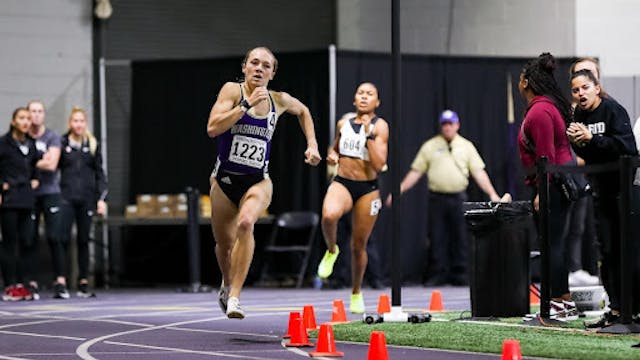 The GIST: The men and women of indoor track & field may have been competing all month, but their first season rankings just clocked in on Monday. While outdoor track & field is more widely known (thanks, Olympics!), its quirky winter sister is bringing big heat. Let’s race.

How it works: The NCAA indoor season is short, but intense, much like the tracks (more on that in a minute). Sanctioned competitions don’t kick off until January, even though athletes may compete in internal or practice meets earlier. After the NCAA’s committee selects its qualifying contenders, the season will finish with a mid-March championship in Albuquerque, NM.

The differences: Other than taking weather — especially wind — out of the equation, the biggest difference between outdoor and indoor track & field is the size of the track. Outdoor tracks are 400M while indoor ones are half that size. And since athletes are racing at high speeds in the tighter 200M space, there are wall pads to cushion sprinters’ momentum.

The contenders: Leading the ladies are the No. 1 Texas Longhorns, which is unsurprising given their sprinters. Julien Alfred already broke the 60M NCAA record twice, and Rhasidat Adeleke owns the 200M record. Biting Texas’ heels, though, are the middle-distance queens of No. 2 Washington and new 60M hurdles record holder Masai Russell’s No. 3 Kentucky ’Cats.