Queen of the court 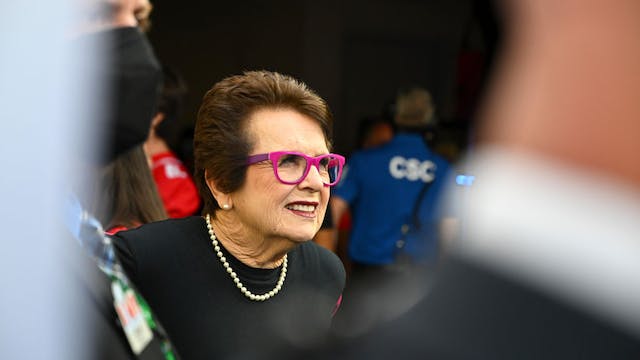 No history of women’s sports is complete without the one, the only, Billie Jean King (BJK). Here’s a quick rundown of why she’s on top of our throne.

In 1970, BJK led a group of nine women in protesting unequal pay and opportunities to compete in the tennis world. The “Original Nine” broke off from the United States Lawn Tennis Association’s (USLTA, now USTA) to create their own tennis tour that later became the Women’s Tennis Association (WTA) we know today.

But King’s most famous fight would occur in 1973, when she defeated (in straight sets, no less) former men’s world No. 1/shameless hustler/self-proclaimed chauvinist Bobby Riggs in the “Battle of the Sexes.”

BJK put on her battle armor in the courts as well, taking to Capitol Hill to testify on behalf of Title IX. With her advocacy, the legislation passed in 1972. Now in its 50th anniversary year, it’s worth reading the text in full:

To this day, King continues her relentless advocacy through her Women’s Sports Foundation, which she established in 1974.