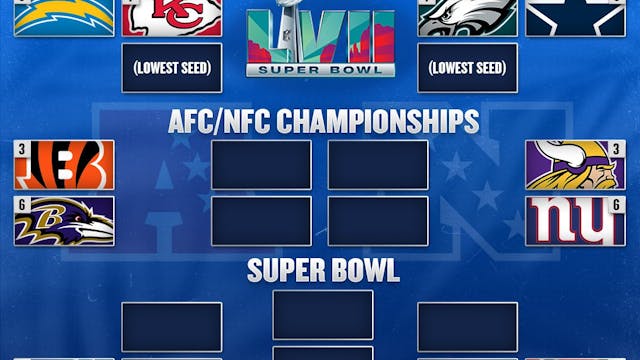 The GIST: The first NFL weekend since Hamlin’s injury (and last of the regular season) was filled with emotional scenes, heartfelt tributes and stunning plays en route to deciding the 14-team playoff field.

AFC: The Kansas City Chiefs (literally) ran circles around the Las Vegas Raiders, posting a 31–13 Saturday rout to lock in the No. 1 seed and a crucial first-round bye. Then the Jacksonville Jaguars went from worst team in the NFL last year to AFC South champs (and the No. 4 seed) with a 20–16 win vs. the Tennessee Titans. Talk about a glow up.

NFC: The Philadelphia Eagles did their job against the NY Giants, hanging on for a 22–16 win to secure the No. 1 seed in the NFC. And in true dramatic fashion, the final playoff berth came down to the final regular-season game.

Looking ahead: There will be plenty more postseason deets in our full preview later this week, but the next few days will likely be about the teams who didn’t make it. Today is known as “Black Monday,” when eliminated squads often cut ties with their lackluster head coaches (HC).