The Australian Open — tennis’s first Grand Slam of the year

January 15, 2023
The Australian Open — tennis’s first Grand Slam of the year — begins in Melbourne tonight, so today we’re serving up all you need to know before the stars hit the court.
Sports NewsTennis 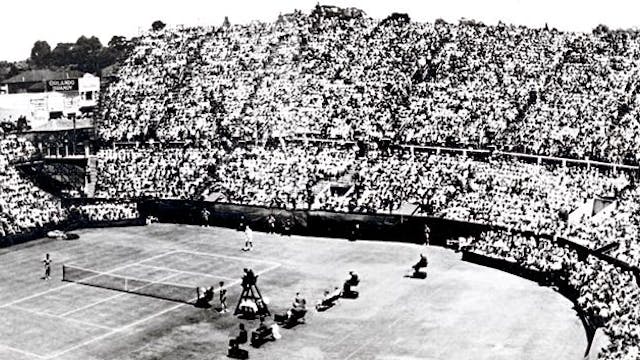 The first iteration of the Australian Open dates back more than a century — the first tournament for men was held in 1905 and the first for women in 1922, both run by the Lawn Tennis Association of Australasia.

The Open struggled to find its footing in the early years. Because Australia is just so dang far away, many international players resisted competing Down Under. While the other three major tourneys — Wimbledon, the French Open and the U.S. Open — had distinct identities, the Aussie Open’s renaissance truly began in the 1990s.

Now for the nitty gritty. On Thursday, 256 combined men’s and women’s singles players (along with 128 combined doubles pairs) were drawn. Those athletes will play four opening rounds leading up to the quarter-finals, beginning on January 23rd.

As for the playing surface, while the Open was originally played on grass, it’s been held on Melbourne Park’s Australian Open True Blue hardcourt surfaces since 1988.

Before we get hyped for this edition’s contenders, there are a few tennis greats who won’t be rallying in Melbourne this year, including reigning champ and Aussie hero Ash Barty. The former world No. 1, who retired not long after her historic 2022 win, won’t be pulling a Brady: Barty recently announced that she’s pregnant.

Keeping with the theme is world No. 47 Naomi Osaka. The icon withdrew from the tourney last Sunday, then on Wednesday dropped the news that she’s also expecting her first child in 2023. Is there anything cuter than babies with rackets?

But in not-so-awesome news, wild-card entry and legend Venus Williams won’t be competing in the major after sustaining an injury two weeks ago. On the men’s side, 19-year-old Spanish sensation No. 1 Carlos Alcaraz also withdrew from the tourney with a leg injury. Say it ain’t so.

🇵🇱 No. 1 Iga Świątek: After Barty’s retirement, the 21-year-old Pole quickly established herself as the one to beat, claiming both the French and U.S. Open titles in 2022. Świątek fell in last year’s Aussie semis, so she’ll be looking to bounce back by adding another Grand Slam to her ever-growing résumé.

🇹🇳 No. 2 Ons Jabeur: Last year saw Jabeur enter the history books as the first African and Arab woman to make a Grand Slam final in the Open Era…and she did it twice, at both Wimbledon and the U.S. Open. But runner-up won’t cut it for the Tunisian, who’s hungry for a major title. Watch out.

🇺🇲 No. 7 Coco Gauff: The aforementioned 18-year-old phenom already has a 2023 title after winning the ASB Classic last weekend. Plus, Gauff was absolutely dominant — she didn’t drop a set all tournament. Damn.

🇦🇺 No. 35 Ajla Tomljanović: Australia’s best hope to keep the title Down Under may be a longshot, but Tomljanović posted her best tour yet last year, making the quarter-finals of both Wimbledon and the U.S. Open. Plus, the hometown crowd will be Aussie, Aussie, Aussie, Oi, Oi, Oi-ing her all the way.

🇨🇦 No. 39 Leylah Annie Fernandez: Fernandez and her compatriot No. 42 Bianca Andreescu are bringing Gen Z energy to the hardcourt, and are Canada’s best hopes to go the distance.

🇪🇸 No. 2 Rafael Nadal: If the 2022 champ can repeat, he’ll nab his record-extending 23rd Grand Slam singles title, further solidifying his GOAT status in the process. The “King of Clay” is known for his prowess on softer surfaces, but he’s no stranger to hardcourt success either.

🇷🇸 No. 5 Novak Djokovic: Last year’s edition infamously lacked a Down Under appearance from the Joker, aka Mr. Novax. But if the nine-time Aussie winner’s hamstring holds out, he could certainly add to his hardcourt dynasty this month.

🇦🇺 No. 21 Nick Kyrgios: As for the green and gold, they’ll be cheering for the entertaining but controversial Kyrgios. Not only is the 2022 Wimbledon finalist itching for his first Grand Slam singles title, but he’ll also be defending his stunning 2022 doubles run alongside fellow “Special K” Aussie Thanasi Kokkinakis. Antics abound with this one.

The Open begins on Monday the 16th in Australia, which happens to be tonight in North America. Tune in on ESPN in the U.S. and TSN in Canada. And if your 2023 resolution was to read more, you can browse all the live updates here.