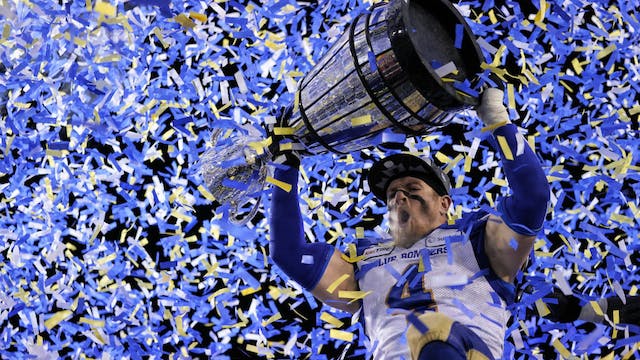 The GIST: And then there were two. This Sunday’s 6 p.m. ET 109th Grey Cup will feature the Toronto Argonauts taking on the defending back-to-back champ Winnipeg Blue Bombers for a finals rematch 72 years in the making.

Toronto Argonauts: After redeeming last year’s brutal Division Final exit, the East Division–winning Argos have no plans to fumble their chance at the trophy. Especially with 35-year-old running back and hometown hero Andrew Harris miraculously returning after suffering what appeared to be a career-ending injury in August. Amazing.

Winnipeg Blue Bombers: The Blue Bombers dominated the West Division and look poised for a three-peat. The biggest hurdle? Their star quarterback Zach Collaros might not be 100% after leaving the semis early with an apparent ankle injury.

Prediction: The Blue Bombers certainly have the experience — and they are from Win-ipeg — but the Argos have a dark horse story that’s so compelling, we have to lean their way. Who doesn’t love an underdog?