November 28, 2022
Four teams remain in the championship hunt for the gals, while the fellas set their quarter-final field yesterday.
College SportsSoccer 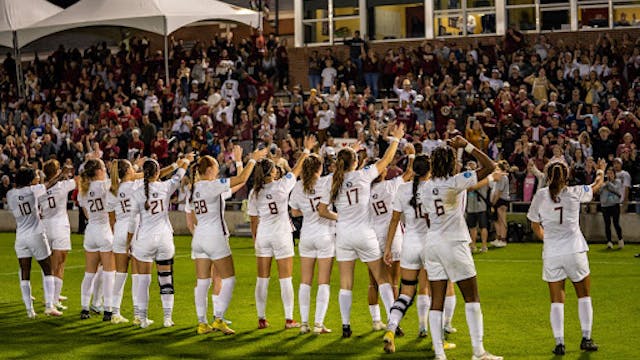 The GIST: There were no turkeys on NCAA pitches this weekend as the best in the beautiful game played for a shot at the natty. Four teams remain in the championship hunt for the gals, while the fellas set their quarter-final field yesterday.

The women: Three of the tourney’s No. 1 seeds advanced to this Friday’s semis, but all had to fight to get there. The defending champ Florida State Seminoles booked their ticket to Cary, NC, thanks to a 53rd-minute No. 3 Arkansas Razorback own goal that was the, ahem, razor-thin difference in the ’Noles 1–0 win.

The men: As for the fellas’ third round, No. 3 Syracuse, No. 7 Duke, No. 13 Indiana, Vermont and Portland all notched tight but expected victories over No. 14 Cornell, No. 10 FIU, Marshall, UCLA and Western Michigan, respectively. Unseeded Creighton, though, knocked out No. 15 Tulsa with a 2–1 upset win on Saturday and No. 12 UNCG upset No. 5 Stanford in penalties last night.