Kansas State men's basketball is the moment in college sports

January 20, 2023
A Big 12 team who was supposed to have a losing season, led by a first-year head coach (HC) and an athlete who shouldn’t be the roster’s star.
College SportsBasketball 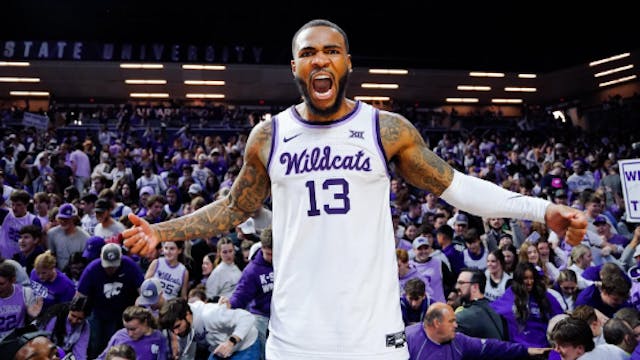 The GIST: A Big 12 team who was supposed to have a losing season, led by a first-year head coach (HC) and an athlete who shouldn’t be the roster’s star. Sound familiar? No, it’s not football’s national runner-up TCU, but the Wildcat ballers from Kansas State, who are the moment in college sports.

The expectations: The No. 13 Wildcats, whose 2021–22 season ended with a dismal 14-17 record and a ninth-place finish in their 10-team conference, were supposed to end this season back at the bottom of the Big 12. Instead, Kansas State got their heads in the game, achieving a 16-2 record so far in the country’s toughest men’s hoops conference.

The coach: If HC Jerome Tang was a player, he’d be Rookie of the Year. The 56-year-old first-year HC (and hype king) from Trinidad and Tobago spent 20 years as an assistant, then associate HC at Baylor before taking Manhattan, KS, by storm. He’s now only the second Wildcat coach to defeat Kansas on the first try. Hear that swish? It’s Tang sinking his shot.

The miracle: With just two returners, Tang filled the Wildcat roster with transfers, including big-risk-big-reward forward Keyontae Johnson, aka the “walking miracle.” The former Florida Gator star, who didn’t play for nearly two years after collapsing during a December 2020 game, struggled to find a team who wasn’t afraid to let him play. Until Tang called, that is.

What’s next: Much like the gridiron group the Wildcats resemble, the sky’s the limit for this Kansas State crew. They’ll have to work for it, though — KSU has the ninth-hardest remaining schedule in the country. If the Wildcat magic continues, Kansas State could write a fairy tale Final Four ending, the purple and white’s first since 1964. Glass slippers off the glass.