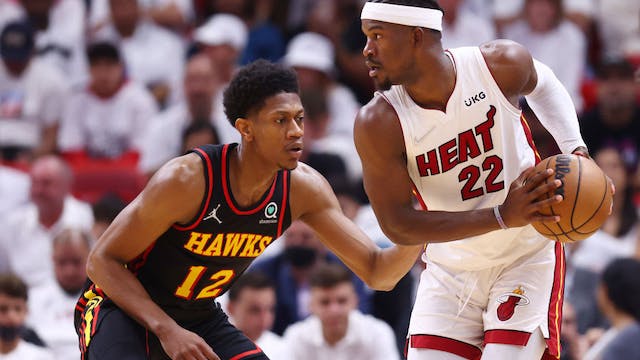 The GIST: With daily playoff action and first-round series just heating up, it’s a hell of a time to be a hoops fan. Ball truly is life.

Last night’s games: In Tuesday’s lone Eastern Conference matchup, the No. 1 Miami Heat continued to dominate the No. 8 Atlanta Hawks, notching a 115–105 win behind 45 points from Jimmy Butler and extending their series lead to 2-0.

Tonight’s games: Prepare yourself for a hotly contested Eastern Conference tripleheader. First, the No. 2 Boston Celtics (1-0 lead) host the No. 7 Brooklyn Nets at 7 p.m. ET. Game 1 featured a buzzer beater and double birds. Who knows what could be next?

​Elsewhere: The Western Conference No. 3 Golden State Warriors lead the No. 6 Denver Nuggets 2-0, and despite the absence of Dallas superstar Luka Doncic, the No. 4 Dallas Mavericks and No. 5 Utah Jazz are tied at one game each.