March 29, 2021
The GIST: After a record number of upsets in the first two rounds, the men’s Sweet Sixteen went mostly as expected, with all of the remaining No. 1 seeds advancing to tonight and tomorrow’s Elite Eight action. That said, the tourney’s Cinderella team found their fairy godmother, and turned the tables on the beloved Sister Jean.
Sports NewsBasketball 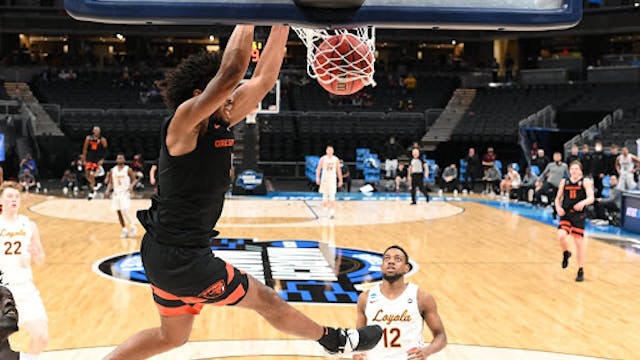 Tonight’s games: No. 12 Oregon State continued their underdog run, defeating No. 8 Loyola Chicago on Saturday to advance to their first Elite Eight since 1982. The Cinderella story Beavers will need all the magic they can get when they take on No. 2 Houston and their stifling defense tonight at 7:15 p.m. ET.

Tomorrow’s games: No. 1 Gonzaga extended their undefeated campaign with ease, handily defeating No. 5 Creighton 83–65 yesterday. Gonzaga will face No. 6 USC, fresh off a hard fought victory over No. 7 Oregon. We do love an underdog, but our money’s on the ’Zags in this one. How can you bet against this guy?

The UCLA Bruins are just the second team to advance to the Elite Eight after competing in the “First Four” play-in round. More like Bru-Win, right?