Three of the NHL’s best players are just heating up

December 16, 2022
It may be getting colder outside, but three of the NHL’s best are just heating up. Bundle up and check in on a few of the league’s ongoing milestone quests.
Sports NewsHockey 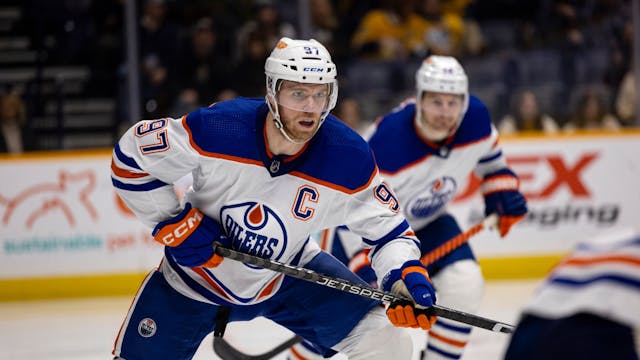 The GIST: It may be getting colder outside, but three of the NHL’s best are just heating up. Bundle up and check in on a few of the league’s ongoing milestone quests.

Mitch Marner: First up, a journey that sadly came to a close. The Toronto Maple Leafs winger’s franchise record-breaking point streak ended at 23 during last night’s 3–1 loss to the NY Rangers, but he did tie the legendary Wayne Gretzky for 18th longest streak in league history. Not too shabby.

Alex Ovechkin: Speaking of the Caps, Ovi’s already turned in a historic week, becoming the third player in NHL history to record 800 career goals with a cheeky hat trick against the Chicago Blackhawks on Tuesday. Now the 37-year-old left winger is just one goal away from tying the late Gordie Howe for second-most in league history.

Connor McDavid: Edmonton Oiler Connor McHockey is no stranger to the record books. While his current point streak is only at 11 games, the speedster is on pace to do what only two players — Hall of Famers Gretzky and Mario Lemieux — have done before: record 161 points in a single season. Slick as the oil on his jersey.