November 16, 2022
Ahead of what will likely be his final World Cup, Portugal icon Cristiano Ronaldo’s making the wrong kind of headlines amid his monthslong fallout with Premier League team Manchester United.
Sports NewsSoccerCross Country 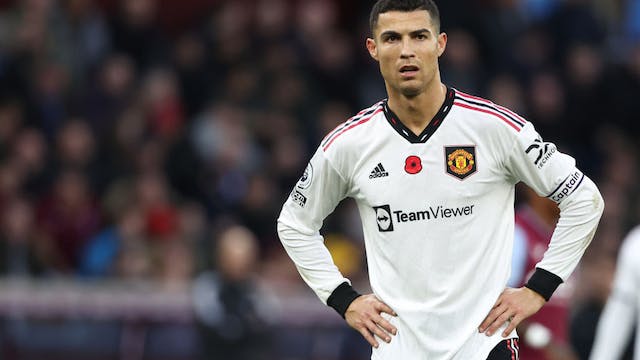 The GIST: Ahead of what will likely be his final World Cup, Portugal icon Cristiano Ronaldo’s making the wrong kind of headlines amid his monthslong fallout with Premier League team Manchester United. Spoiler alert: he’s the problem, it’s him.

The timeline: Ronaldo’s been at odds with ManU since 2021, when he stunningly returned to the club that helped him reach superstardom. Despite Ronaldo finishing with the third most goals in the league that year, storied Manchester United still disappointed with a sixth place finish.

The background: Ronaldo’s heralded as one of the game’s best on the pitch, but this is just the latest in a series of controversies off it. Most notably, he faced rape allegations stemming from a 2009 incident. The woman’s lawsuit was dismissed earlier this year, but Ronaldo did reach a $375K non-disclosure settlement with her in 2010.

The impact: While that history already forever tainted his legacy for us, this latest nonsense will undoubtedly leave a sour note as the 37-year-old nears the end of his career. And it’s all crucial to keep in mind when the spotlight shines even brighter as he leads Portugal on soccer’s biggest stage starting next week.