October 06, 2022
The most wonderful time of the year is here — October baseball, baby. The newly expanded MLB playoffs saw 12 of the league’s 30 teams punch their postseason tickets, and today’s special edition has everything you need to know before the fun tees off tomorrow.
Sports NewsBaseball 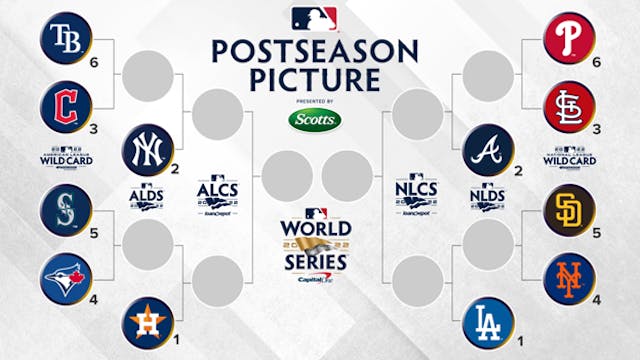 As for the 12 teams who make the postseason, there are six from each league — the American League (AL) and National League (NL). Each is represented by its three divisional winners (East, Central and West) and the league’s next best three teams (aka the WCs).

And with the aforementioned increase in teams, the WC round has changed dramatically. While each league previously sent two squads to face off in one single-elimination WC game, each league will now have two three-game series, notably hosted entirely by the higher-seeded team. There’s no place like home, right?

No. 3 Cleveland Guardians vs. No. 6 Tampa Bay Rays: The youngest roster in baseball, the Guardians came out of nowhere to secure the AL Central crown. But they’ll need standout performances from their vets, like pitcher Shane Bieber (no relation to Justin) and third baseman José Ramírez, if they want to mount a deep playoff run.

No. 4 Toronto Blue Jays vs. No. 5 Seattle Mariners: After narrowly missing the playoffs last season, Canada’s team is back playing October baseball, and they got there by quietly amassing a league-leading .264 batting average.

No. 1 Houston Astros: Yes, the team everyone loves to hate is once again back in the playoffs. And the 2017 World Series champs are incredibly stacked. Thirty-nine-year-old pitcher Justin Verlander found a new gear this year, posting the best ERA in baseball.

No. 2 NY Yankees: Outfielder Aaron Judge’s successful quest for the AL single-season home run record has (rightfully) dominated the news, but the Evil Empire has plenty more starpower where that came from.

No. 3 St. Louis Cardinals vs. No. 6 Philadelphia Phillies: Previously mentioned history-making slugger Albert Pujols has been a major key for the NL Central–winning Cards. The DH’s journey to 700 career home runs (and counting!) helped St. Louis stay red hot down the stretch.

No. 4 NY Mets vs. No. 5 San Diego Padres: Don’t let their late September collapse (and loss of the NL East title) fool you — this Mets team is loaded. They feature two of the top pitchers in the game in Jacob deGrom and Max Scherzer, not to mention the best offense in the NL. Get you a team that can…do it all.

No. 1 LA Dodgers: The 2020 World Series champion Dodgers somehow just keep getting better and will be making their 10th straight postseason appearance.

No. 2 Atlanta Braves: Save for LA’s Freeman, the defending champs retained most of their 2021 World Series–winning core and look like contenders once again, especially after nabbing their fifth consecutive NL East title.

The road to the Fall Classic begins when the Guardians take on the Rays tomorrow at 12:07 p.m. ET, with the Wild Card round airing on ESPN in the U.S. before the later rounds air across Fox and TBS. And if you’re in Canada, you can catch all of the action on Sportsnet. Play — and we cannot stress this enough — ball!