Everything you need to know about the UWCL final

May 16, 2021
HAPPY SUNDAY! Remember our UEFA Women's Champions League quarterfinals pop-up back in March? Well, almost two months later and we’ve arrived at the final. This year’s competition will crown a new champ for the first time in five years: FC Barcelona or Chelsea FC. So we’re breaking down the matchup ahead of today’s 3 p.m. ET kickoff in Gothenburg, Sweden.
Sports NewsSoccer 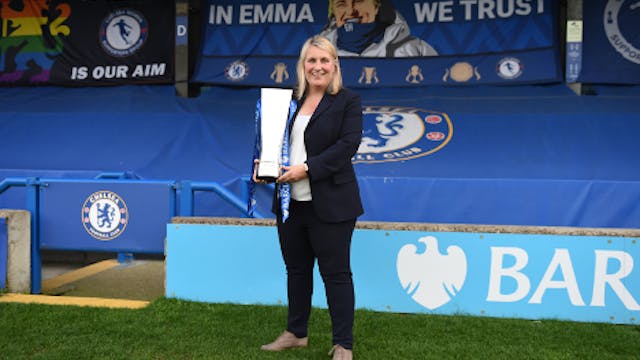 My son asked me this morning if I’d bring a medal home for him today….He’ll love that. He’ll wear that all day tomorrow. Let’s just hope he don’t throw it in the bin.

— Chelsea head coach, Emma Hayes on winning back-to-back Women’s Super League (WSL) titles and sharing the medals with her son, Harry. Will Harry be adding more hardware to his collection today? Tune in and see.

A quick refresher: Union of European Football Associations (UEFA) is the governing body for European soccer, and the top-tier teams from around the continent make up the Champions League. The UEFA Champions League is the biggest club (not country) soccer tournament in the world.

The top two teams (clubs) from each of the strongest 12 national associations are entered, while the weaker associations only get one team entry. From there, teams play in as many as two qualifying rounds before moving to a knockout round of 32, then round of 16, and so on.

In the knockout round, there are two legs within each round. This means that each team plays one home and one away match. Then, the goals from those two matches are added together and the team with the better aggregate score advances.

Five-time reigning UWCL champion Olympique Lyonnais (Lyon) are the most successful club in the league’s history, with seven titles under their belt in nine appearances.

Barcelona may be out for blood this time around after suffering a 4–1 loss to powerhouse Lyon in the 2019 finals. And from the looks of it, the squad has only improved since then.

In this year’s campaign, Barcelona stomped on newcomers PSV Eindhoven in the round of 32 and mainstay Fortuna Hjørring in the round of 16, scoring 17 goals across the two rounds. And in the quarterfinals against top contender Manchester City, they walked away with a 4–2 on aggregate win (featuring a convincing 3–0 match) to move on to the semis.

Leading Barca scorer Jenni Hermoso and forward Asisat Oshoala could be the game changers in today’s championship vs. Chelsea. The two have collectively netted 102 goals in the last two seasons, but Oshoala may not be in tip-top shape after suffering a recent injury.

Chelsea is the newcomer, making their first ever UWCL final appearance. The men’s squad also made it to their Champs League final, marking the first time both the women and men from the same club made it to the final in the same season. So cool.

After winning handily over Benfica in the round of 32, Chelsea went on to best Atlético Madrid and Wolfsburg, before their toughest battle against Bayern Munich in the semis. Of course, Chelsea went on to win 5–3 on aggregate and advanced to the final.

Representing the red and white for the Blue is Jessie Fleming. The 23-year-old midfielder joined Chelsea last summer, after finishing her college career at UCLA. She started three times during her first professional season and we hope she gets some minutes today. Number 17 on the pitch, but number one in our hearts.

At the helm for Barcelona is Lluís Cortés. Cortés joined Barcelona in 2017 as an analyst and later became an assistant coach before taking over the head coach role in 2019. Cortés quickly earned respect across the league after leading the team to the finals the same year he took the reins. Actions speak louder than words.

Now back to Hayes. A charismatic and seasoned leader on the pitch, Hayes is also the first female head coach in 12 years to lead a team to the finals. After hopping across the pond to serve as head coach and director of football operations for the NWSL’s Chicago Red Stars until 2010, Hayes returned to England and found her home with Chelsea in 2012.

Unlike several North American leagues, the Champions League final will be fanless this year due to Sweden’s current COVID-19 restrictions. But, for us landlocked in North America, that doesn’t matter much anyway.