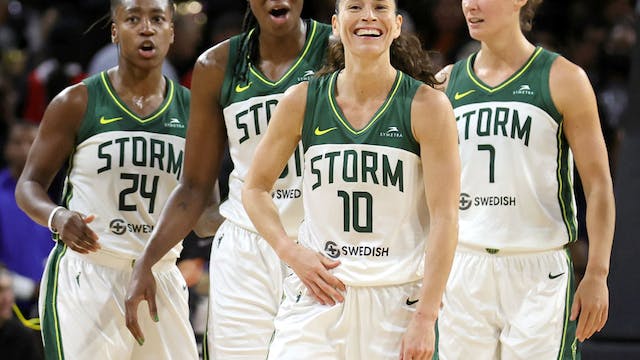 The GIST: Game 1s done and dusted. And if yesterday is any indication of how the rest of these five-game series will go, we’re in for a treat.

No. 1 Las Vegas Aces vs. No. 4 Seattle Storm: The Storm won big in Vegas, stealing home-court advantage with a down-to-the-wire 76–73 victory. The Aces nearly completed the comeback, but Seattle’s Jewell Loyd called game with just over 30 seconds to go, adding to her game-high 26 points.

No. 2 Chicago Sky vs. No. 3 Connecticut Sun: The Sun picked the perfect time to register their first win against the Sky this season, topping the defending champs 68–63 in another back-and-forth thriller yesterday. The difference-maker? DeWanna Bonner, who brought her experience and led the way with 15 points.